Gonzowrite is my tribute to Hunter S. Thompson.   Years from now, when historians are researching what life and society was really like in the 1960’s, 1970’s and 1980’s, they’ll read Hunter Thompson.

Hunter Thompson wrote about our life and times, as he put it, “close to the bone”. He wrote of the last half of the 20th century as it really was, the real “nitty gritty” of our lives. His mind mirrored that of America: revolutionary, passionate, and intensely complex.  It became to be known as gonzo journalism.  “The aim of every writer is to arrest motion, which is life, by artificial means and hold it fixed so that a hundred years later, when a stranger looks at it, it moves again since it is life…. This is the writer’s way of scribbling oblivion through which he must someday pass.”
I stand reverently in awe at his immense talent. And in wonder at the personal demons that drove his writing.
In the Rum Diary, his first book, you can discern the beginnings of Thompson’s torment :  “I sat there a long time, and thought about a lot of things.  Foremost among them was the suspicion that my strange and ungovernable instincts might do me in before I had a chance to get rich.  No matter how much I wanted all those things that I needed money to buy, there was some devilish current pushing me off in another direction – toward anarchy and poverty and craziness.  That maddening delusion that a man can lead a decent life without hiring himself out as a Judas Goat.”
And:  “Sometimes at dusk, when you were trying to relax and not think about the general stagnation, the Garbage God would gather a handful of those choked-off morning hopes and dangle them somewhere just out of reach; they would hang in the breeze and make a sound like delicate glass bells, reminding you of something you never quite got hold of, and never would.   It was a maddening image, and the only way to whip it was to hang on until dusk and banish the ghosts with rum.  Often it was easier not to wait, so the drinking would begin at noon.  It didn’t help much, as I recall, except that sometimes it made the day go a little faster.” 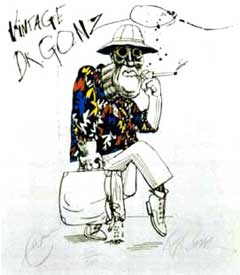 That was Hunter S. Thompson. Oh, that I could write so well !