The accompanying photographs are the story of my 3 backpacking trips, 1975, 1988 & 1993, across the Sierra Nevada mountain range, from the west side straight across to the east side, including ascents to the top of Mt. Whitney.

The 1975 and 1993 trips were “complete”, whereas the 1988 trip was cut short half way through due to the total lack of physical conditioning of my backpacking partner.

By tradition on all my treks in and around Sequoia we always start the evening before by climbing Moro Rock to the top and sit with whiskeys and cigars as the sun sets.  From the top of Moro Rock you can see the first three day’s of trail up the Kaweah Gorge.  Then to the lodge for our “last supper”; steak, baked potato, salad and ice cream.  Knowing full well that for the next 8 days it will be gorp & freeze dried meals only. 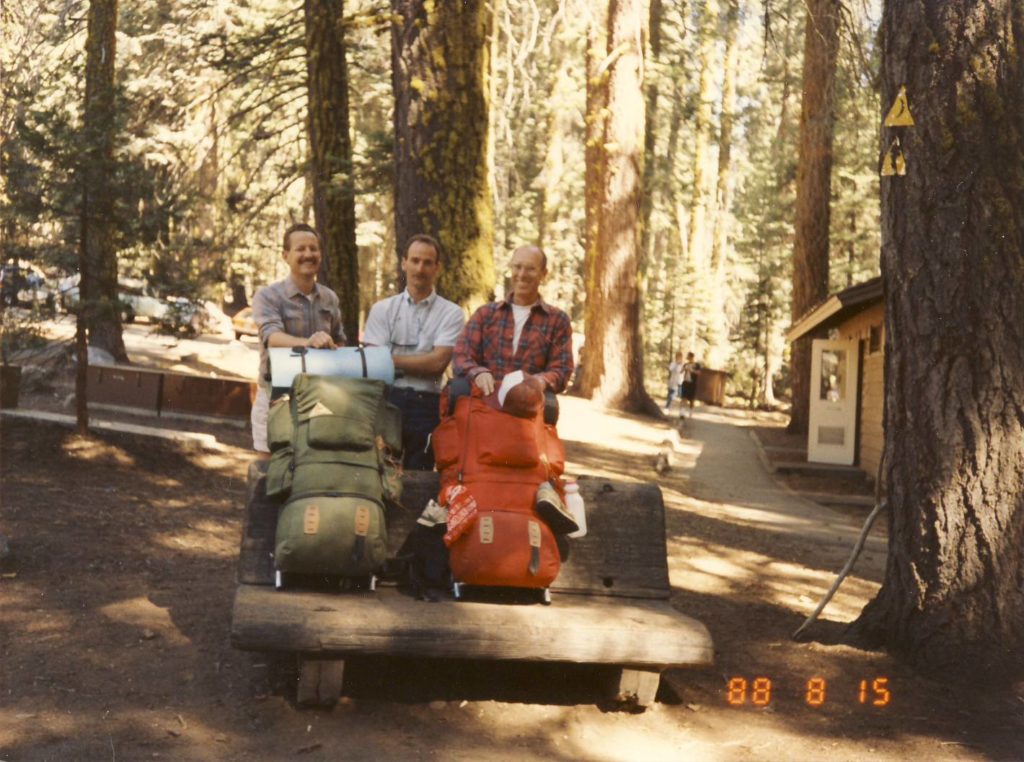 The beginning of the 1988 trek Crescent Meadows parking lot.   Randy Thomas, Will Giddings [my driver who didn’t go on the trek] and myself, about to load up and head out.

The trek begins on the west side of the Sierra in Sequoia National Park at Crescent Meadows, elevation 6,716′ feet.  It’s a disconcerting feeling when you watch the driver pull out of the parking lot with the car, knowing that now you’re committed!  No turning back!

Following the High Sierra Trail, the first day is a relatively “level” hike with a climb to 7,670’ elevation from Crescent Meadow to Bear Paw Meadows, a distance of 11 ½ miles. 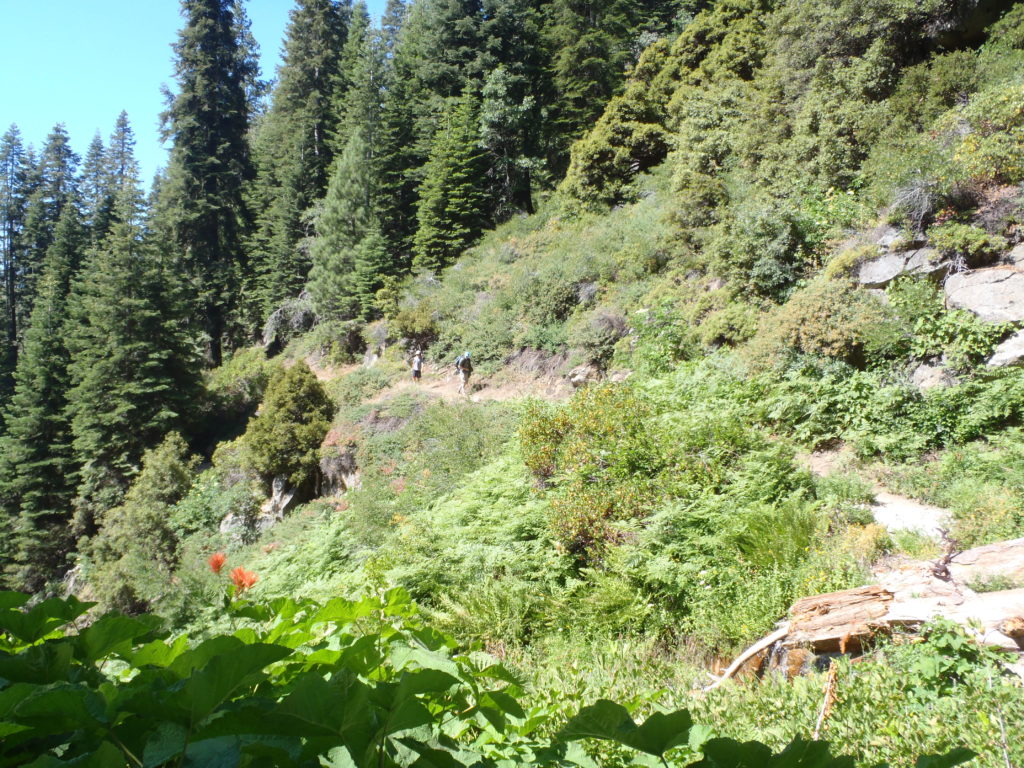 You travel through the Giant Sequoia trees, ferns, lush meadows, and the rocky cliffs along the north side of the Kaweah Gorge crossing a number of streams. 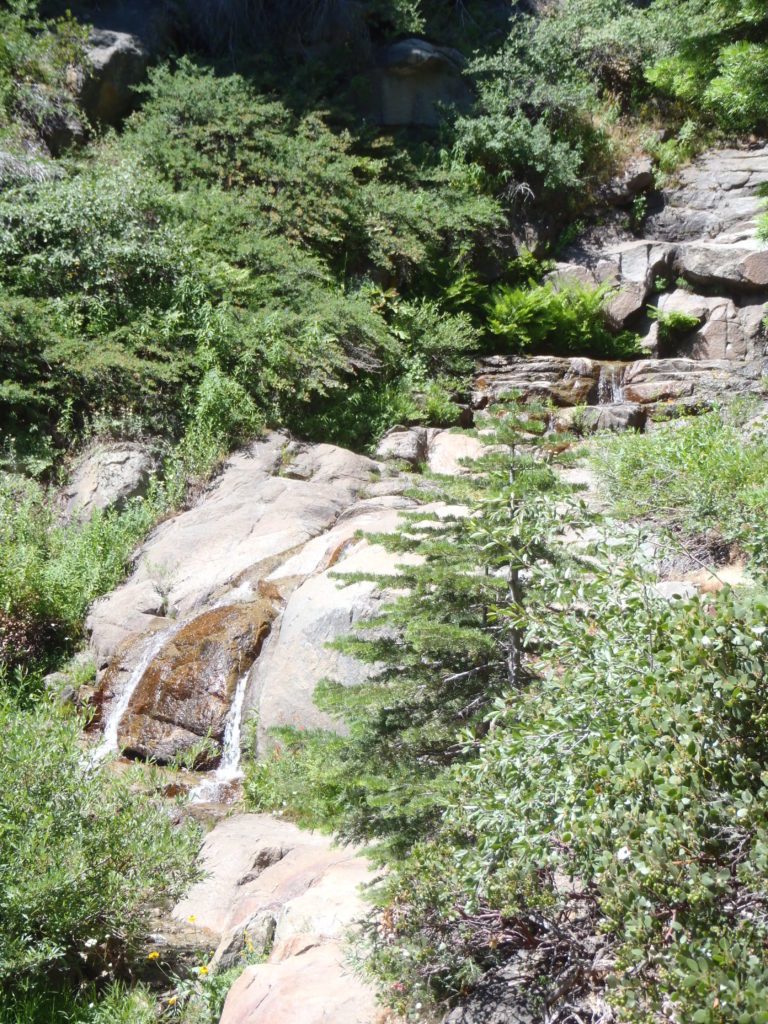 Seven Mile Creek, 7 miles into the trail, a good spot to camp here if you’re not sure you can make it to Bear Paw! 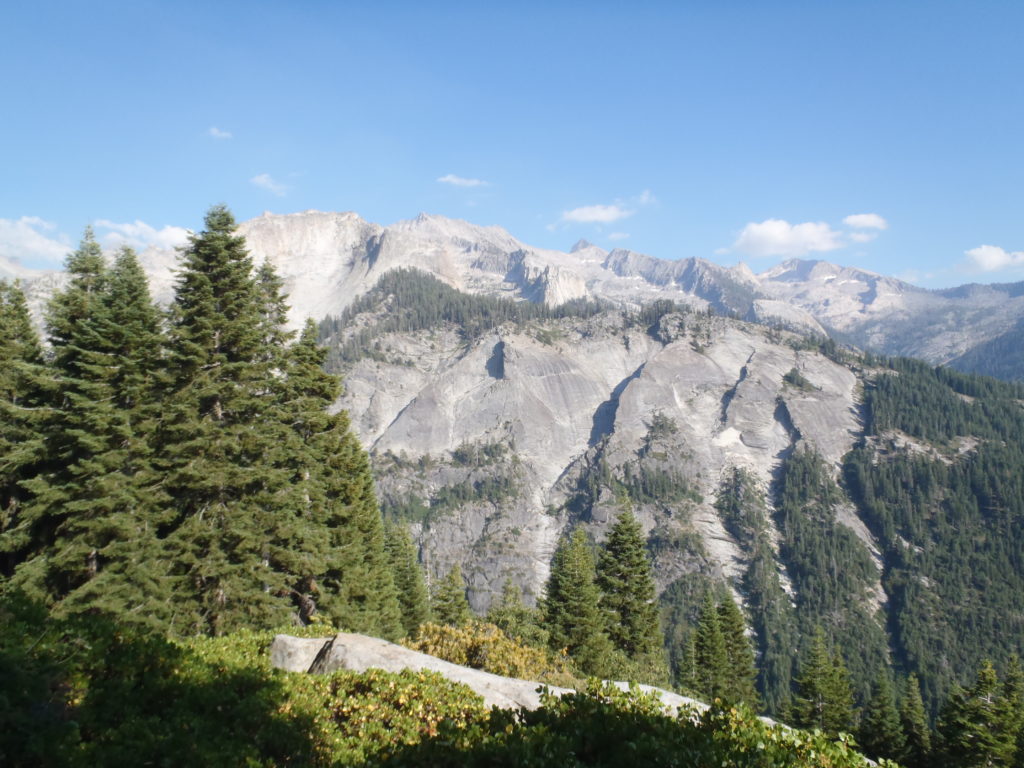 Looking eastwards across the Kaweah Canyon.  The river Kaweah River is 3,000′ below. 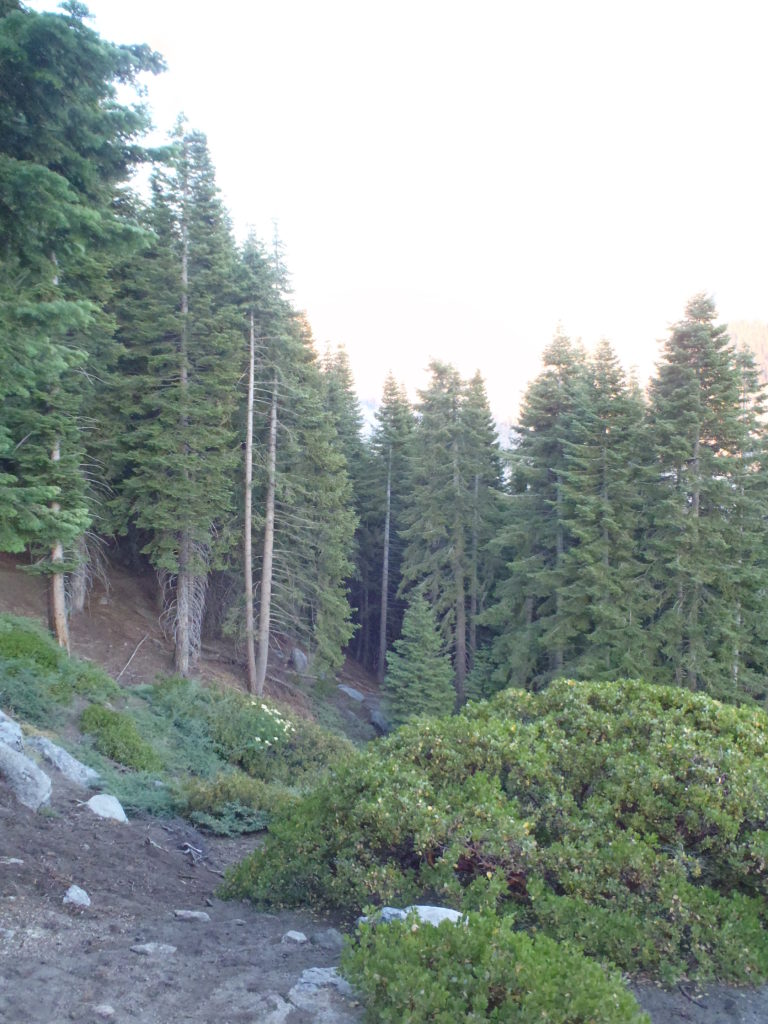 The High Sierra Trail winds through the pines and firs. 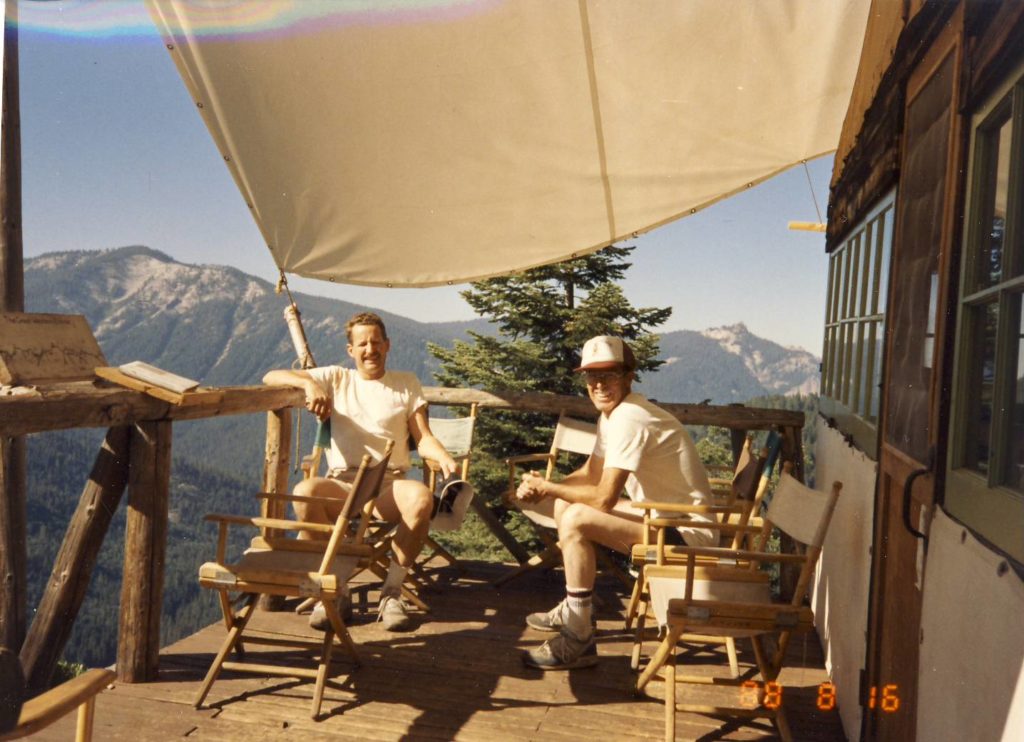 The end of the first day, Bear Paw Tent Camp.

A commercial establishment where you get a great dinner, “adult beverages”, a comfortable cot in a tent, and a hot shower!  It’s expensive as hell, but really wonderful after a long 11 1/2 miles first day’s trek.  There’s also a pubic campground nearby with toilets and water [and lots of bears!]. 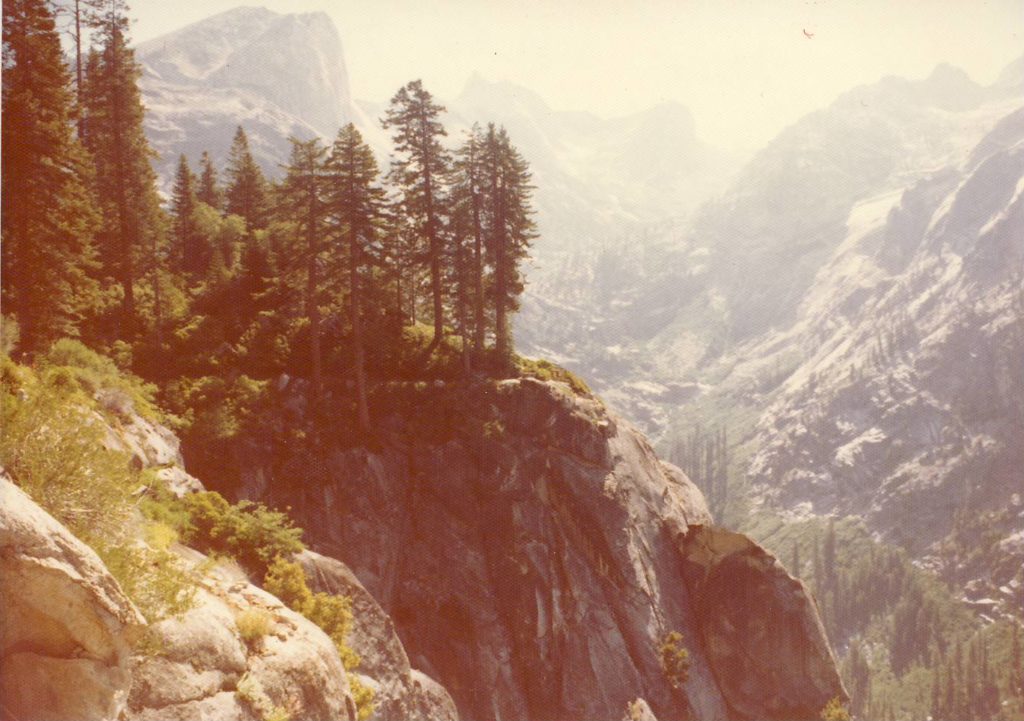 Leaving Bear Paw, headed to Hamilton Lake.  You can see the trail along the edge of the cliff.

Day two is a short day, only 5.8 miles, and takes you up to Hamilton Lake at an elevation of 8,240′ feet.  The foliage gradually becomes mountain mahogany and tundra grasses. You arrive here early, about noon, and it’s important to “hang out” here and stay the night as you begin acclimatizing to the higher elevations. 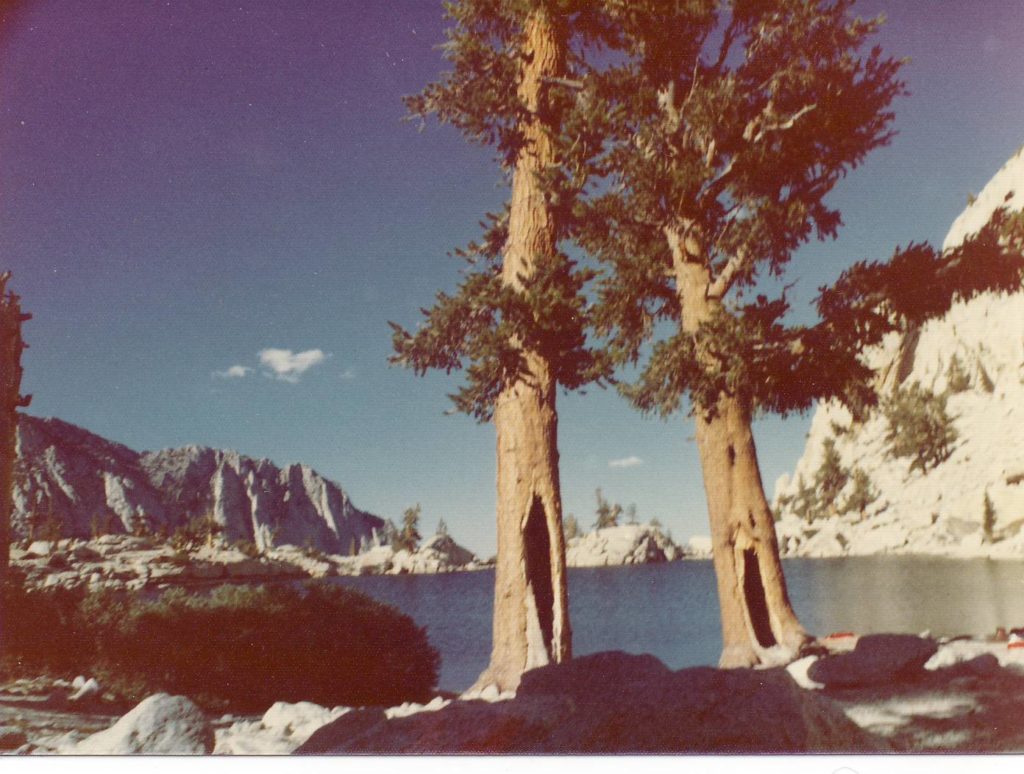 After Hamiton Lake the third day is an intense climb up a steep switchbacky trail to the area known as the Kaweah Gap.  About 8 miles hike today.  At this elevation you’re now well above the timber line and it’s all boulders and tundra grass. 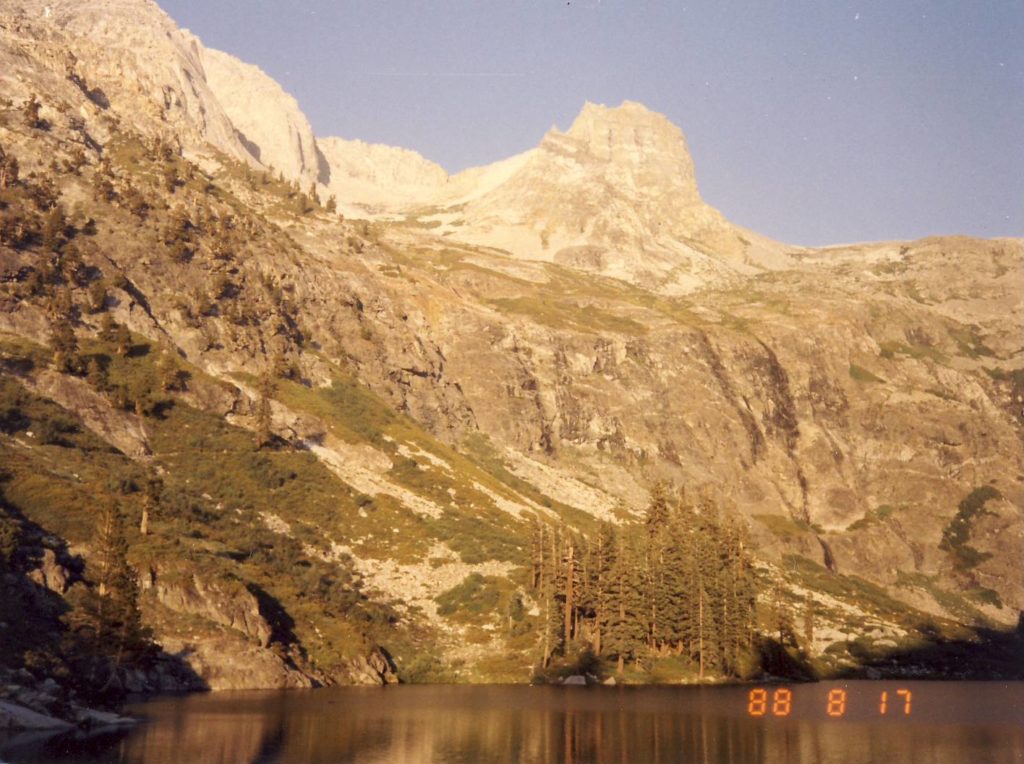 The slope we climb from Hamilton Lake up to the Kaweah Gap. 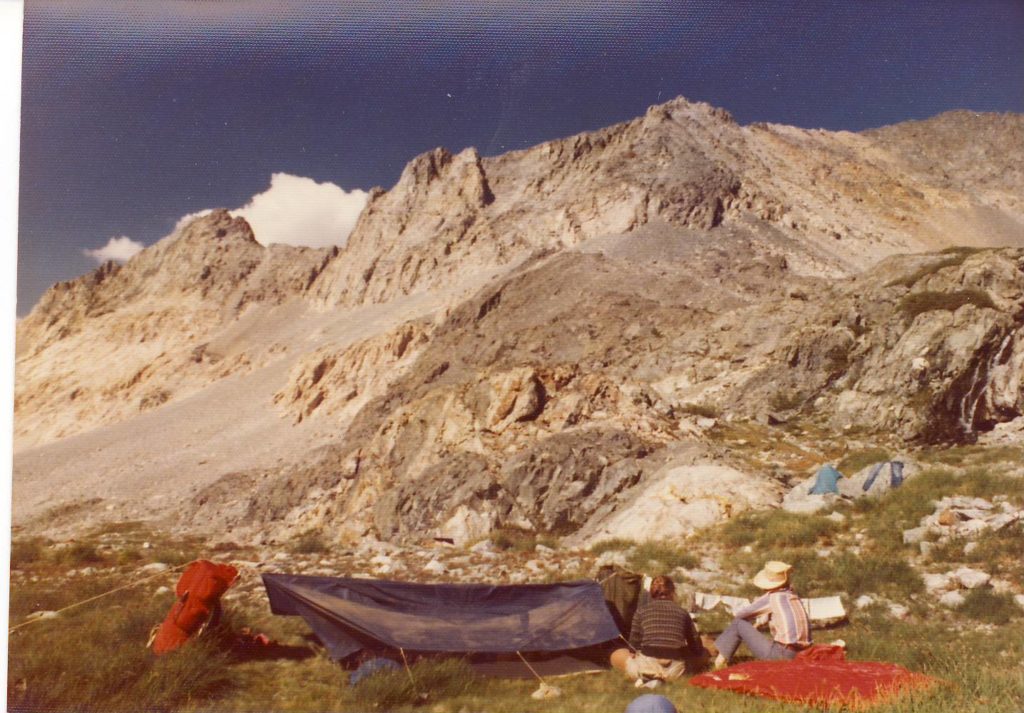 We camp at 11,202′ feet on the west side of the Kaweah mountains on a little “bench” which is just big enough to pitch a tent.   It’s bitter cold, even though it’s the middle of August.

Day four is a tough “scramble” up an incredibly steep talus slope to a very narrow “gap” in the cliffs which we named “Pants Pass”.   This gap is in the Black Kaweah Mountain and is the access to Kaweah Basin.  There is no trail. 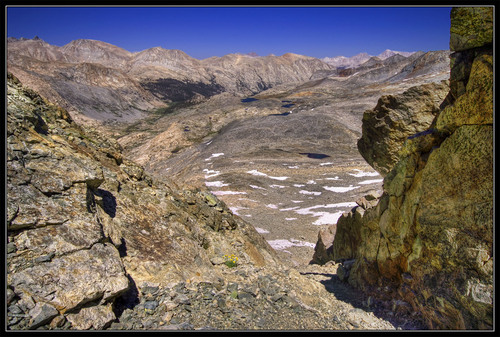 Looking down into the Kaweah Basin from Pants Pass

The “Pants Pass” name comes from the fact that we ripped our pants on the sharp rocks as we negotiated our way over this pass.  We named this thing in 1975 and the name has stuck, other trekkers call it Pants Pass even to this day.  Near the top other climbers have since driven pitons into the rocks to “rope up” so as to belay each other for safety. 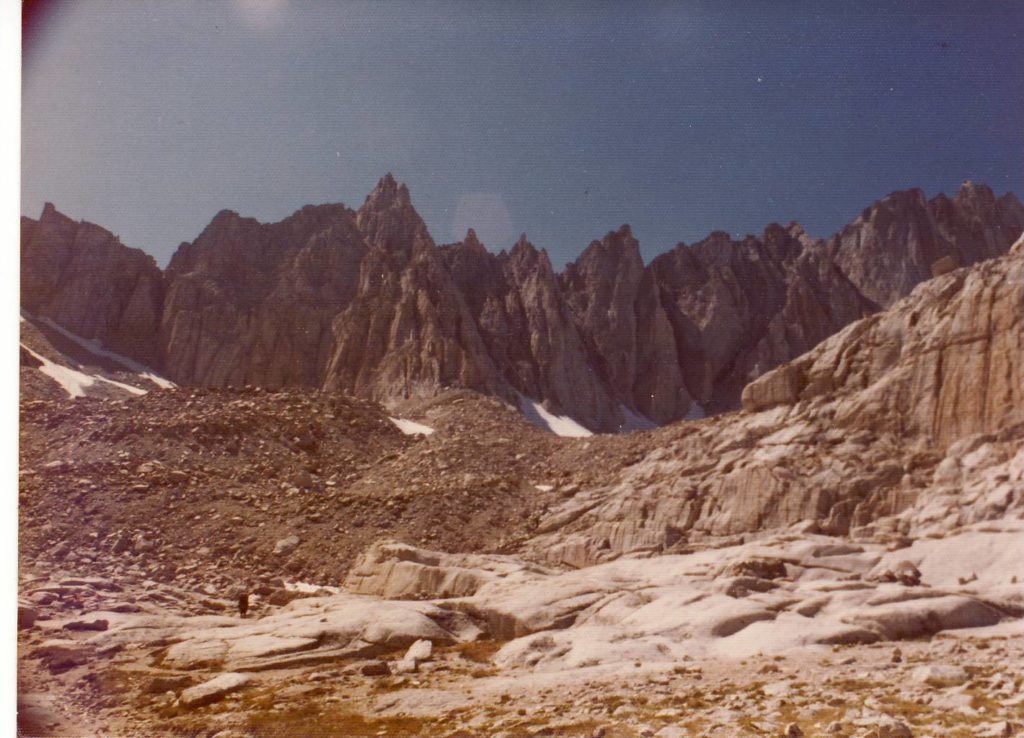 A view of the approach to Pants Pass which takes us over the Black Kaweah Range into the Kaweah Basin. 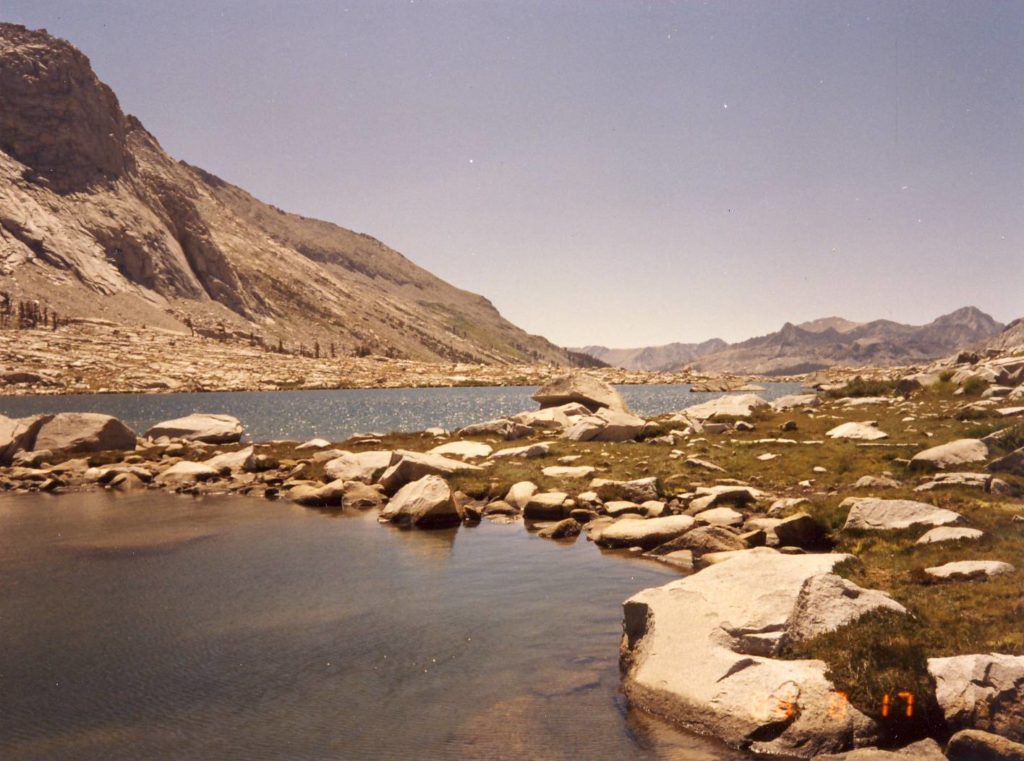 At the end of the day we are high in the Kaweah Basin camped on the edge of one of the many small lakes.  It’s a little over 10,000′ feet up here.  Note that we’ve now been “off trail” all day and in an area seldom visited by anyone, maybe one or two people a year.

The Kern River Gorge, carved by glaciers 10,000 years ago.  Lots of glaciated boulders in the Sierras give evidence that there were huge glaciers here.
The next day, day 5, is a long downhill trek [no trail] to the bottom of the Kern River Gorge.  Here we cross the Kern River which is “waist high”, holding our packs over our heads, and fighting the ice cold rushing water.  If you lose your pack or boots you’re “done”.  That night we camp at the bottom of Wallace Creek.  About 12 miles today, elevation 8,100′ feet. 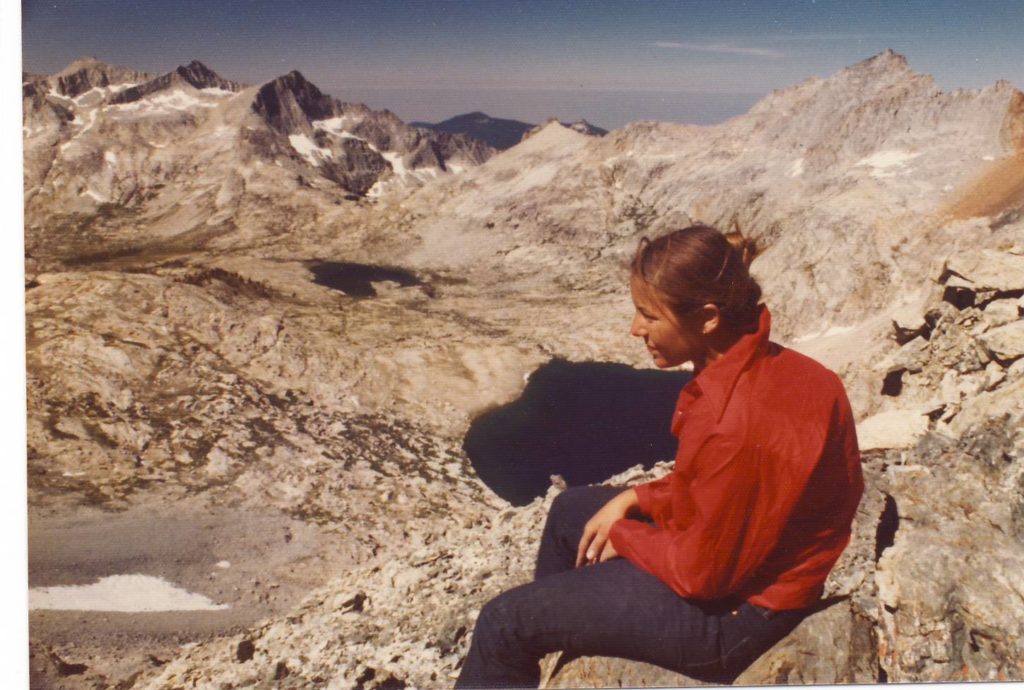 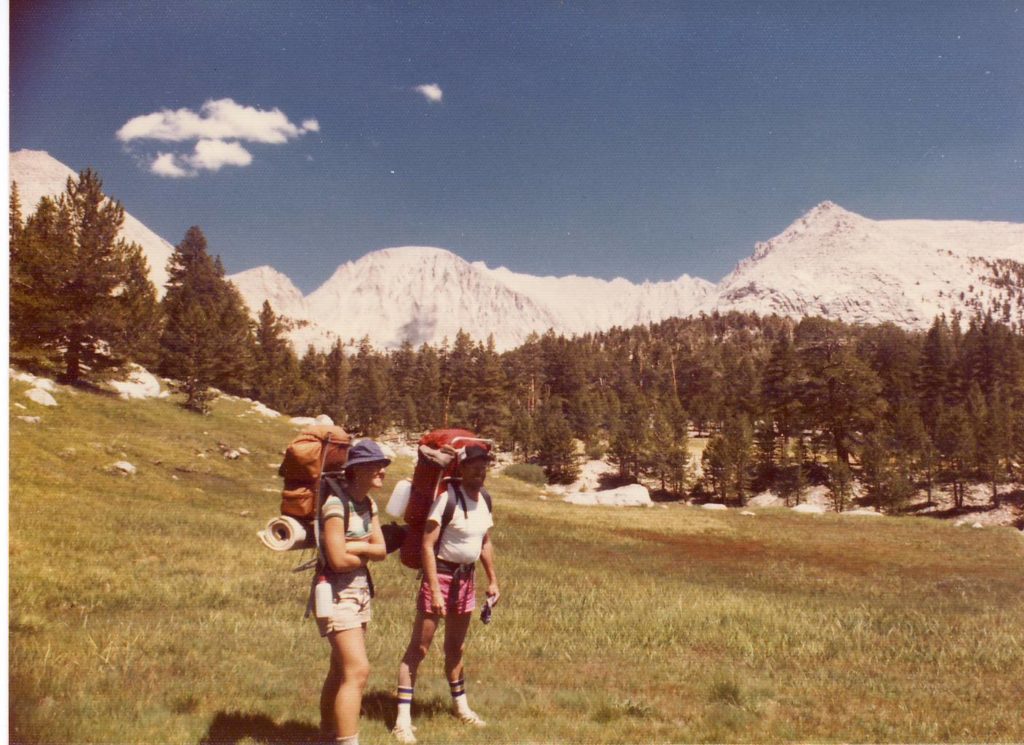 We’ve just entered Crabtree Meadows below Mt. Whitney!
Day six takes us up Wallace Creek to join the John Muir Trail and then on to Crabtree Meadow.  We camp high above Crabtree on the edge of a little lake, 11,381′ ft elevation.  For the past three days we’d seen no other backpackers but now, on the Muir Trail, we encounter several Scout Troops and other backpackers. We’re on the west side and just below Mt. Whitney.  Again it’s bitter cold.  12 miles. 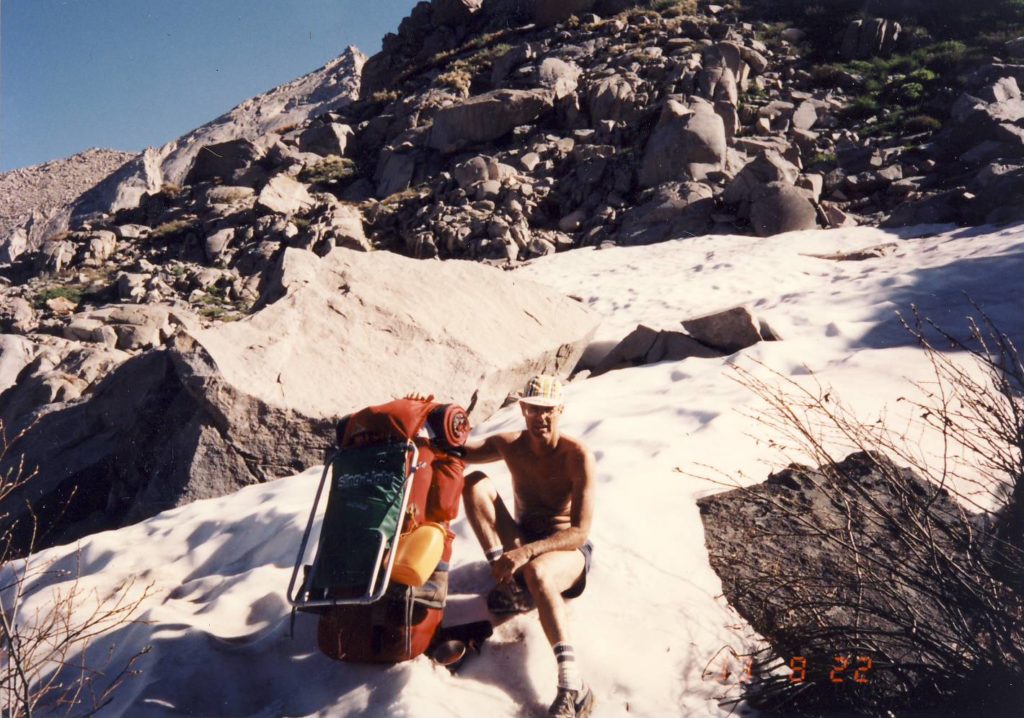 Lots of snow up here even though it’s August. 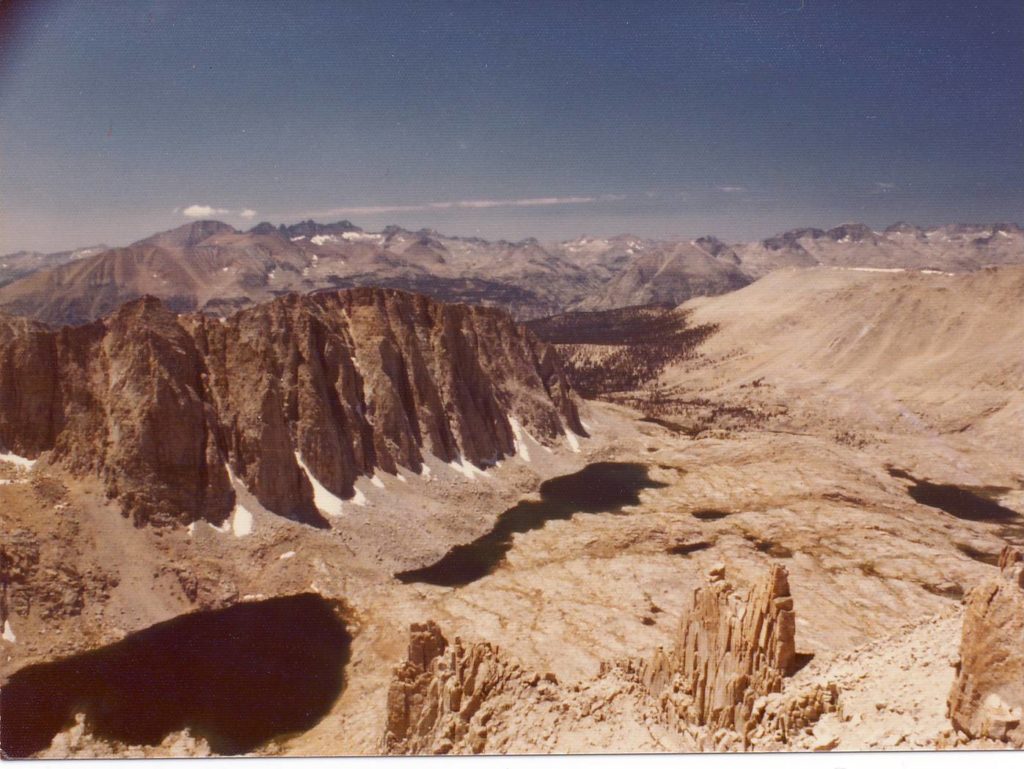 Looking west down from our campsite above Guitar Lake.  On the left horizon in the far, far distance you’ll see the dark shape of the Black Kaweah Range that we came over.  Sequoia’s Crescent Meadows is way beyond. 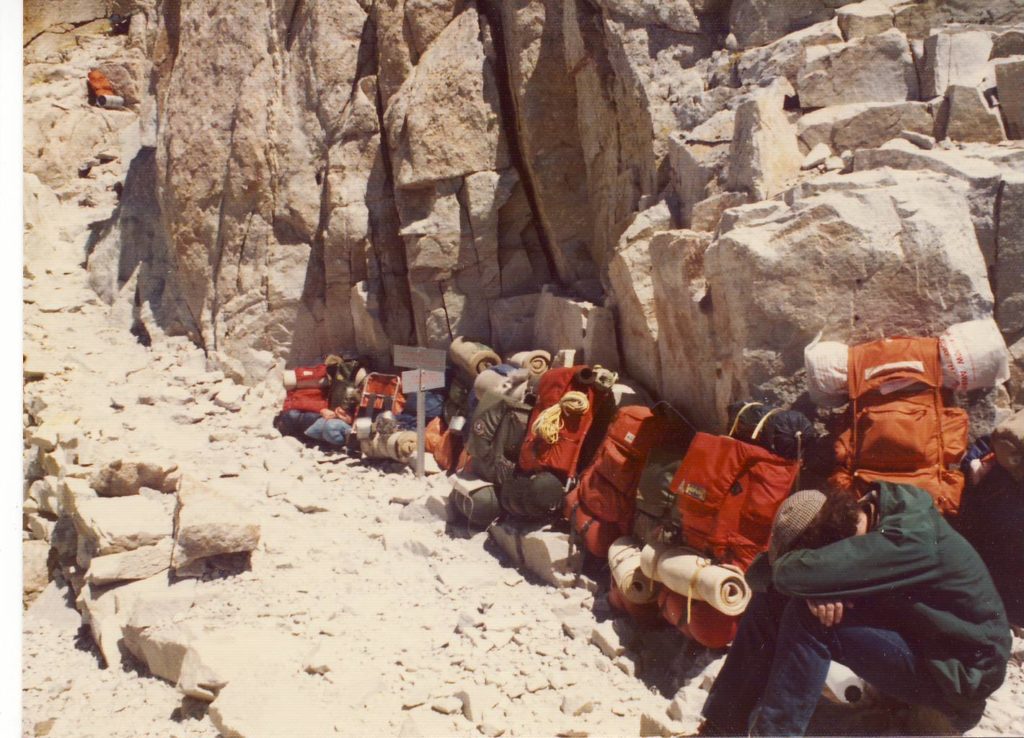 There’s other hikers up here on the Whitney lateral, all of whom came up from the east side [Whitney Portal] without acclimatization and either drop their backpacks here or have left their packs miles back.  Most of them have altitude sickness and are “barfing” and miserable.  Like the guy in the picture!  Because we’ve now become acclimatized to the altitude, we’re carrying our packs to the summit, and we camp on top of Whitney tonight.  It’s spectacular! 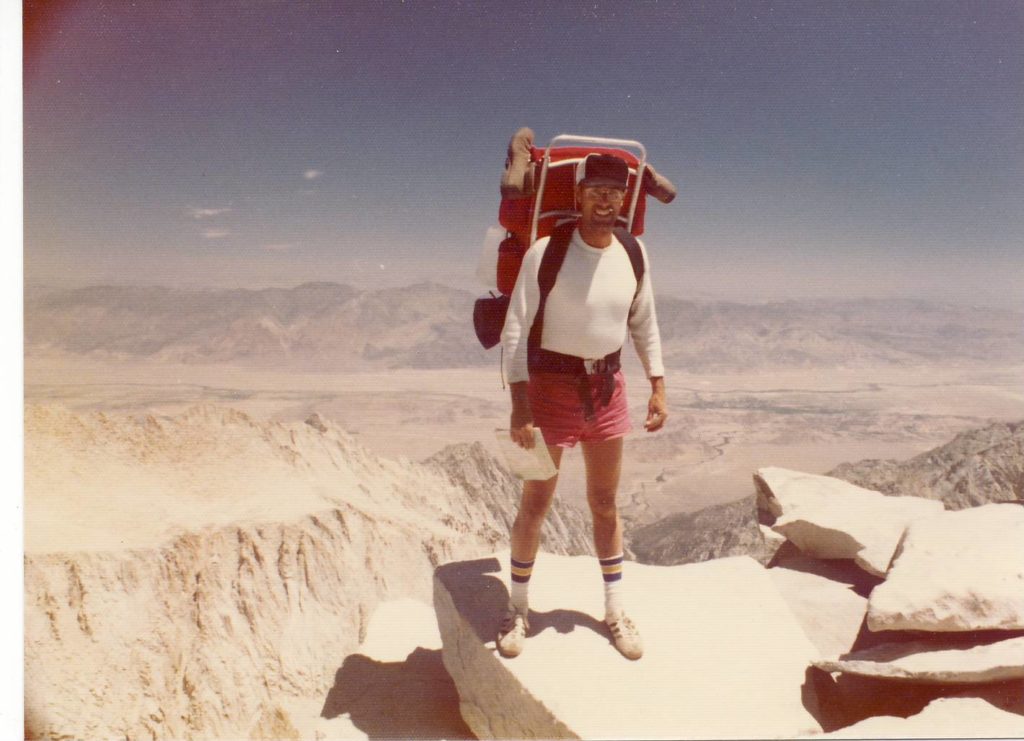 The “Dude”, on the very tippy top of Whitney.  The Inyo Mountains in the distance and Lone Pine below. 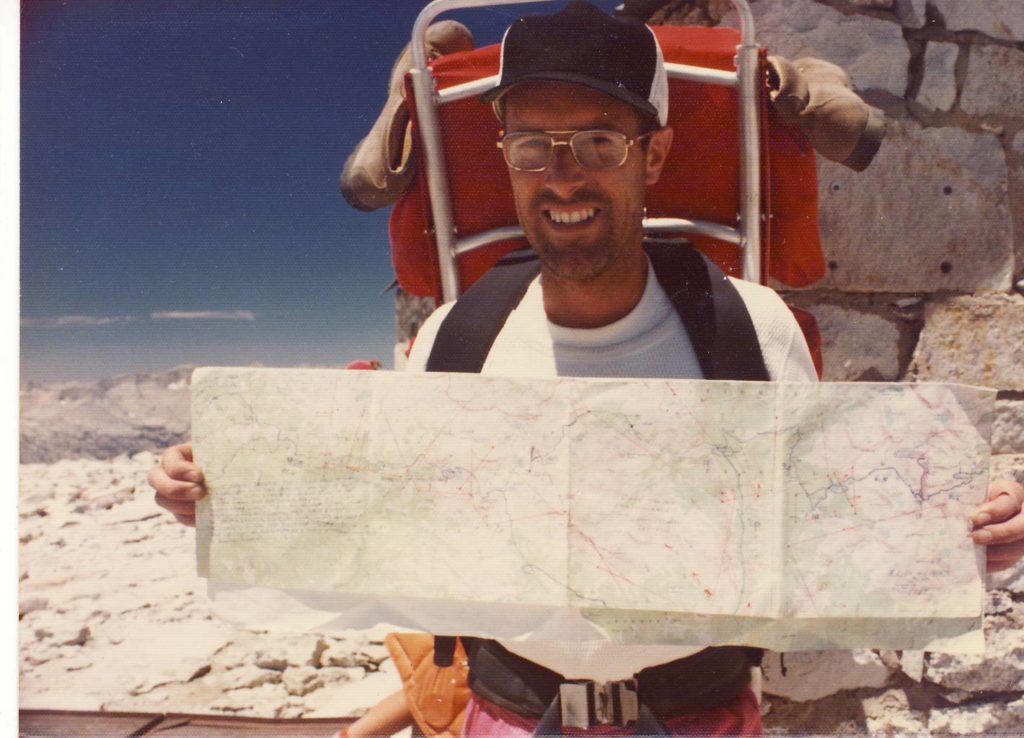 Looking at the map of the route across, 107 trail miles.  Note my boots being carried on the backpack.  I leaned a long time ago that you don’t need [or want] boots on a hike.  Good hiking shoes work better. 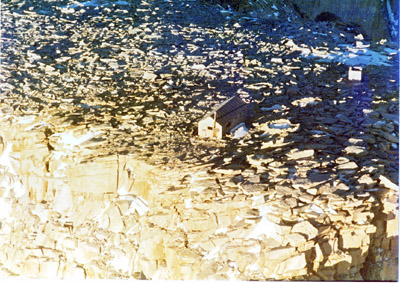 The hut on top of Mt. Whitney.

Here’s an air photo of the hut on the top of Whitney.  I took photos from my plane of the entire route and carried them with me  because the trail maps were “sketchy” and GPS hadn’t been invented yet. 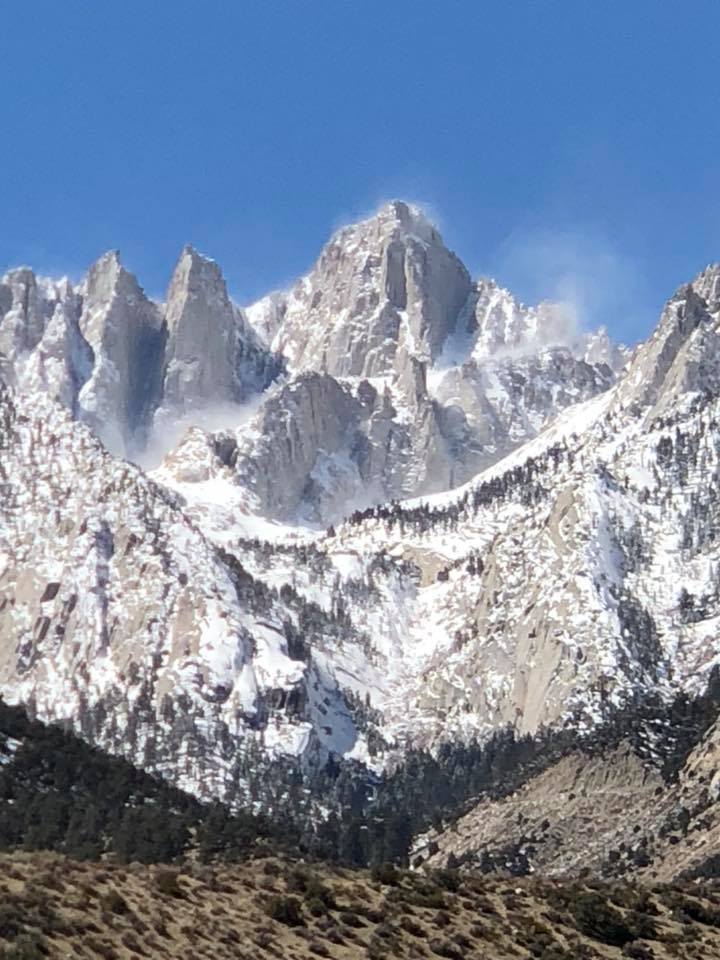 Last day,,, eight days now,,,, from the top of Whitney all the way down to the parking lot at Whitney Portal [8,114′ feet] , then “thumbing” a ride to Lone Pine for a motel, shower, a steak dinner and a “real” bed!  Tomorrow we load onto a Greyhound bus back to Los Angeles. 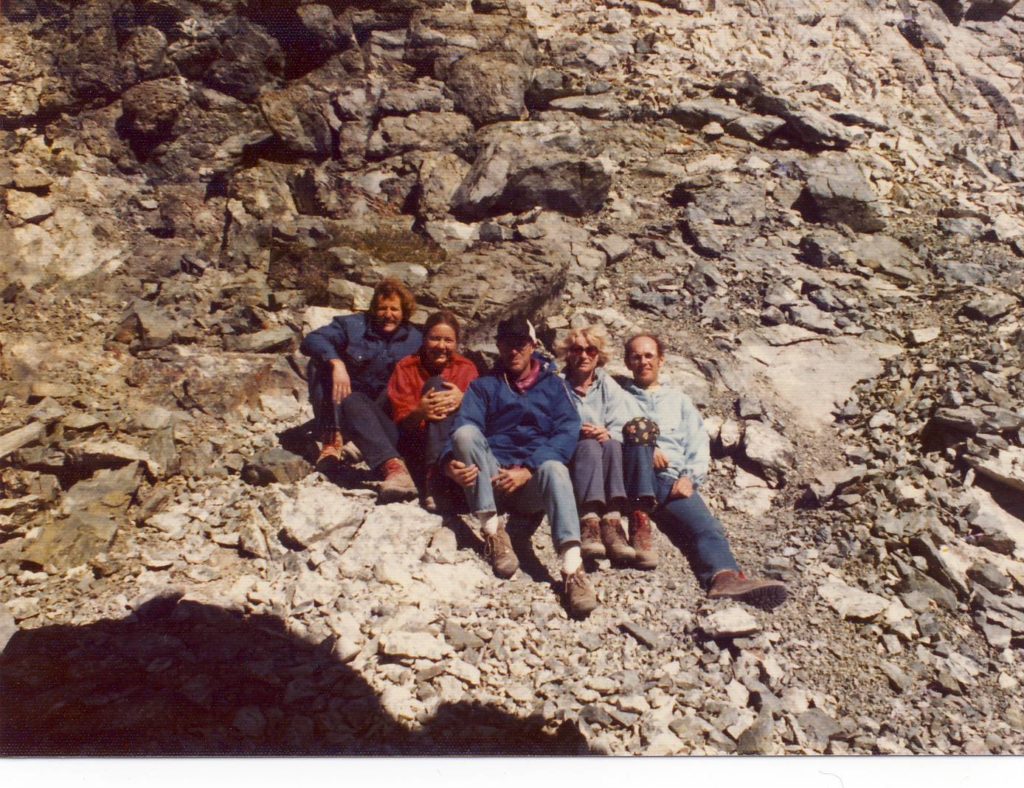 Randy Thomas, Judy Brewster [R,N.] Trent, Dr’s Gerry & Ralph Jung.
1975
The 1975 gang.Trip note: the 1975 trip was with 3 other backpackers, Dr’s Gerry & Ralph Jung and Judy Brewster, a registered nurse, whom I met on the trail the first day.  My “driver”, Randy Thomas, went with me the first couple of days and returned to the parking lot after the 3rd day to drive the car back home.

The 1988 trip was a “bust” due to the poor physical conditioning of my backpacking “partner” half way through [long story] which resulted in his quitting the hike and me quitting also because I was too “scared” to be alone on such a trek as this.  I hiked 18.2 miles non-stop back to Crescent Meadow on the 4th day.   Caught a ride down the mountain to Merced, motel, and Greyhound home the next day.

I was so upset at my lack of “huevos” on the 1988 trek that in 1993 I went back and did the entire hike completely “solo” from one end to the other to prove to myself that I could do it.  It was a “lesson learned”, i.e., to never count on someone else.  To this day I will invite others on  my treks and travels, but if they change their mind or don’t show up, I’m still going.