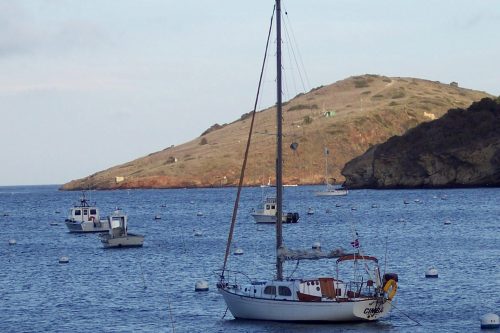 Built of fiberglass back in the days when fiberglass was new technology and they overbuilt everything, she’s “hell for stout”.  Cimba was a serious cruising sailboat, not a “Tupperware” day-sailor like a Newport 30.

She had a LOA 29’ 2”, LWL  23’ 4”,  beam 9’ 2”, draft 3’ 7”, displacement of 8,100 lbs , she carried 355’ sail area and a PHRF rating of 246.   While she will technically sleep 5 [2 in the forepeak, 2 in the main cabin, 1 in the quarter berth], she was better suited for 2 people for cruising.  With a cutaway full keel, keel hung rudder [tiller] and fine entry forward she was surprisingly fast, comfortably stable with an easy motion and would rack up 120 – 130 mile days like clockwork.  I was able to “shut down” many bigger boats, especially in “light airs”. The bigger boats which with longer waterlines were supposedly and technically faster, such as Ericson 32’s, were beaten regularly.  She pointed high and admittedly had a bit of a weather helm in a blow.  But these Islander 29’s are known for their offshore safety and sailing ability.

With all lines leading aft to the cockpit and trouble free wind vane steering, I had her set up for single-handed sailing.   Fitted out in the manner of Larry & Lin Pardey’s “go small, go simple, and go now!” she had oil lamps, an ice box, alcohol stove, etc, so that I wouldn’t fall into the trap of “cruising is fixing things in exotic ports”.

She had an Atomic 4 engine swinging a 10” 3 blade prop, and all new electrical system which took me almost a full year to install.  Her sail inventory consists of the mainsail with two reef points, jib, 150% jenny, small spinnaker, and a large “drifter”.  Lazyjacks controlled the main on dousing.  A Simpson-Lawrence HySpeed anchor windlass, 35 lb CQR on 100’ chain/200’ nylon, 35 lb fisherman, & 20 lb “lunch hook” constituted her ground tackle.

While she had a “head” [bathroom for you landlubbers] with a sink, I never used it.  In the photos it’s just forward of the settee on the port side.  Toilets on boats are inherently “problematical” and can lead to clogging [nasty!] or even sinking since it’s connected directly to the water via a large thru-hole in the hull.  A bucket with 3″ of water in it is far safer!

I sailed her single-handed most of the time [I belonged to the Pacific Singlehanded Sailing  Association] and could sail her into and out of her slip sans engine, and “beat” out of the Marina Del Rey channel in heavy traffic on a weekend.   That was a busy bit of sailing!

Cimba has been down and back to Hawaii more than a few times with the previous owner and is a Baja veteran.  Many I-29’s have gone to the South Pacific, around the Horn and to Europe & the Mediterranean.  A number of them have gone “all the way around”.

I bought Cimba in 2002 from the widow of the original owner who bought Cimba new in 1967.  I was Cimba’s second owner.  My plan and dream was to sail her “all the way around” but circumstances [long story] changed that and I sold her in 2008.