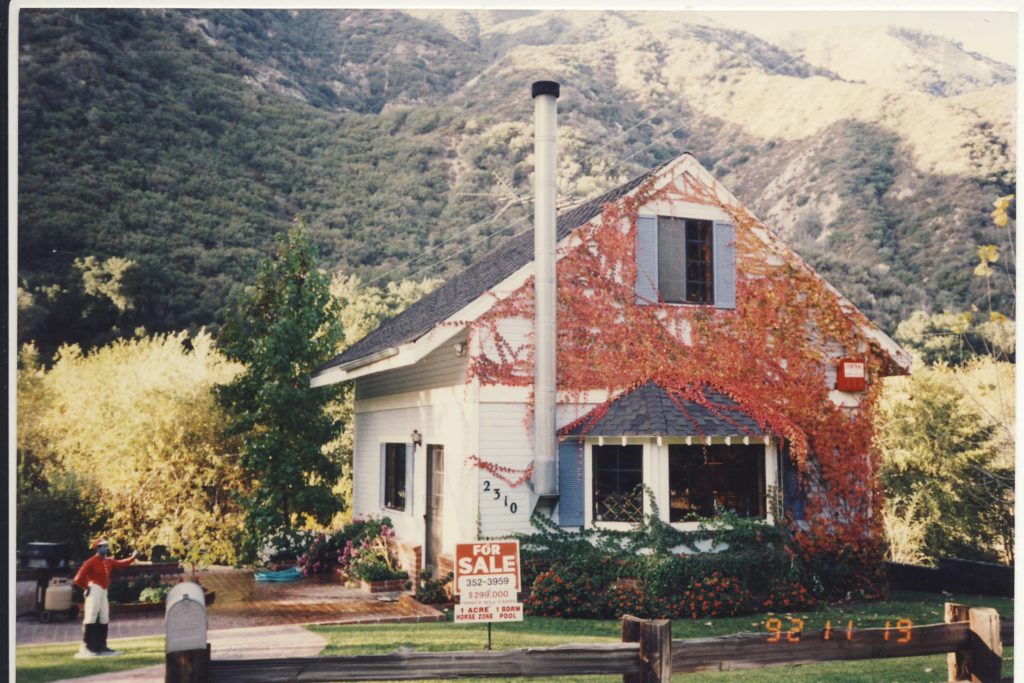 The home I built all by myself.  It took me three solid years, working on it every day.

This is the story of my building my home up in Angeles National Forest.   In 1975 I discovered an area called Vogel Flats which is 8 miles up Big Tujunga Canyon from Sunland.  What was unique was that there was a road, Stoneyvale Drive, which was a county maintained road within the National Forest with about 16 homes along it, just below the Ranger Station.  The community was called Valhalla Ranchos.  All the homes were on private deeded land, not on Forest Service land. 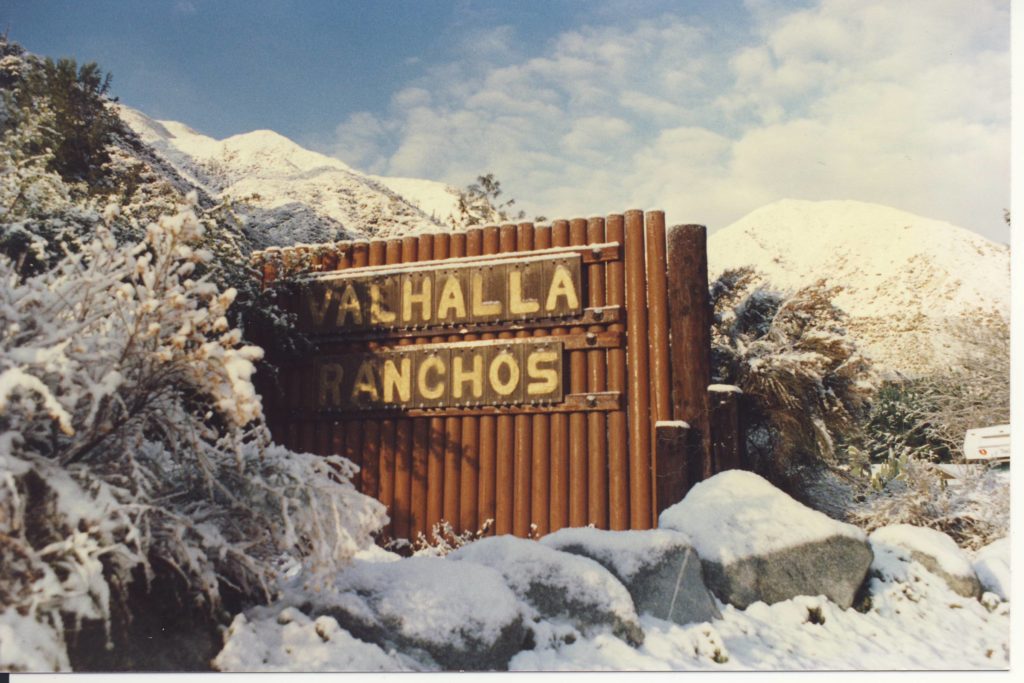 Stoneyvale was in the bottom of the canyon and many of the homes had “stream frontage” on Big Tujunga Creek.  I started inquiring if anything was for sale.  I found a vacant parcel, 1 acre in size, with street frontage on Stoneyvale.  The parcel went all the way across the canyon, with the stream running right through the middle of it, 400′ to the other side.  It had a water well, two corrals, and a hay shed. 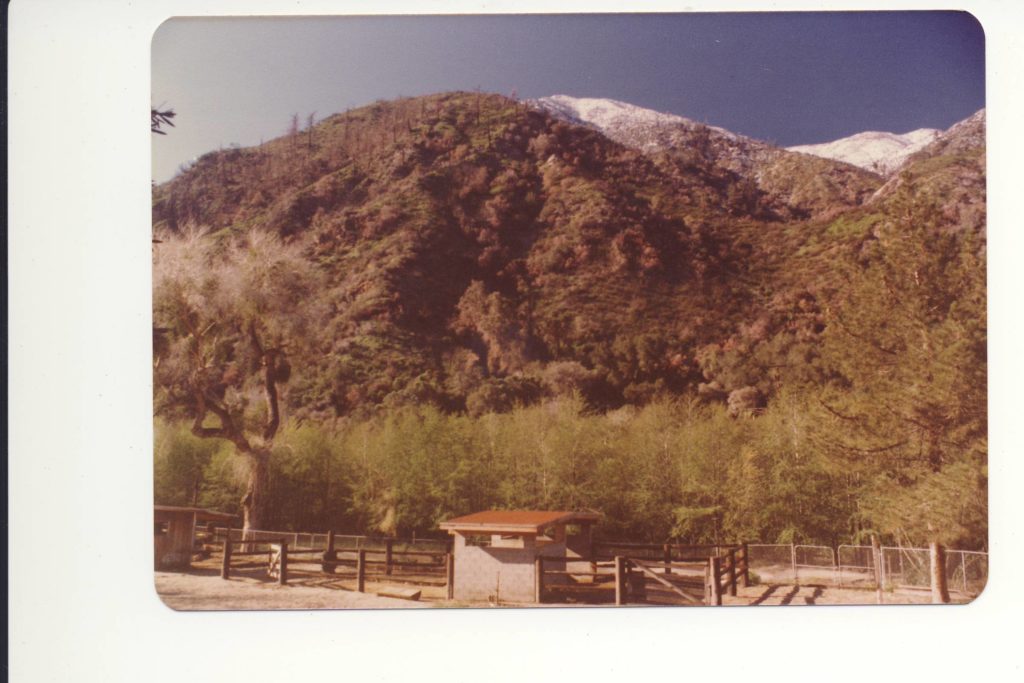 The hay shed and corrals. 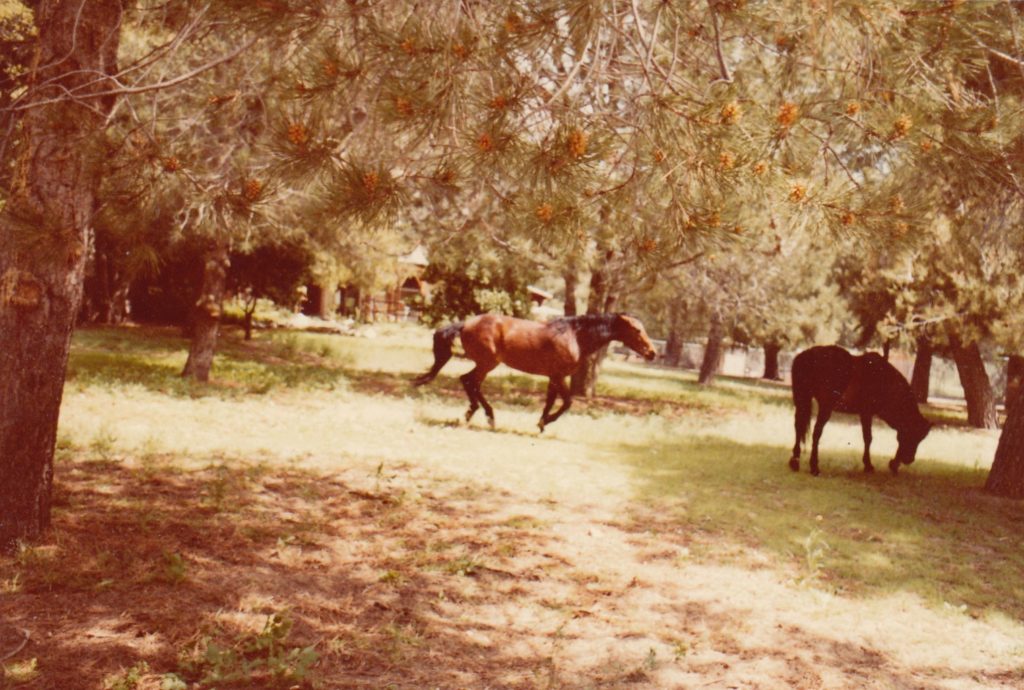 Bennie & Red, our two horses that Bill Wernicke and I brought down from Templeton Meadows for the winter. 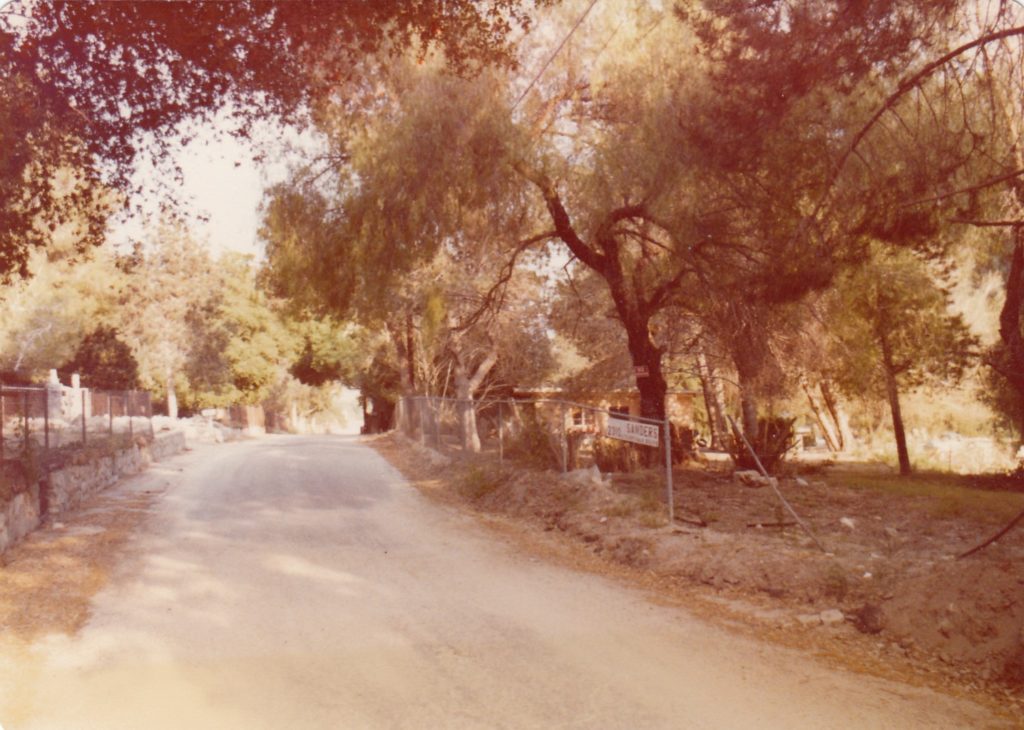 I designed a large 3 bdrm, 3 bath home with a detached garage and had an architect draw up the plans.   I was getting ready to build.  But about that time our economy went into the toilet.  It wasn’t a good idea to borrow a bunch of money to build a house.

I decided that I would build just the garage, modifying it to make it two-story with a bedroom upstairs.   The County Building and Planning Department had all sorts of requirements [hoops that I had to jump through] to get a Building Permit.  Surveys, soils engineering study, water supply [it had a well], flood hazard study, yada, yada, yada.  It cost me another $19,000 in “studies” before they would give me a building permit.

Finally all the studies were approved .  The County gave me the building permit.  Note; they don’t “give” you anything, you have to pay for it!

But that wasn’t the end of it, as I naively thought.  No, they said I also needed a plumbing permit, electrical permit, mechanical permit [heat & A/C], grading permit, septic permit, permits for everything!  Another couple of thousand dollars.

The Building of it

The next day my friend Gerard and I cut down the pepper tree that was in the middle of where the house was going to be and staked out the four corners of the house. 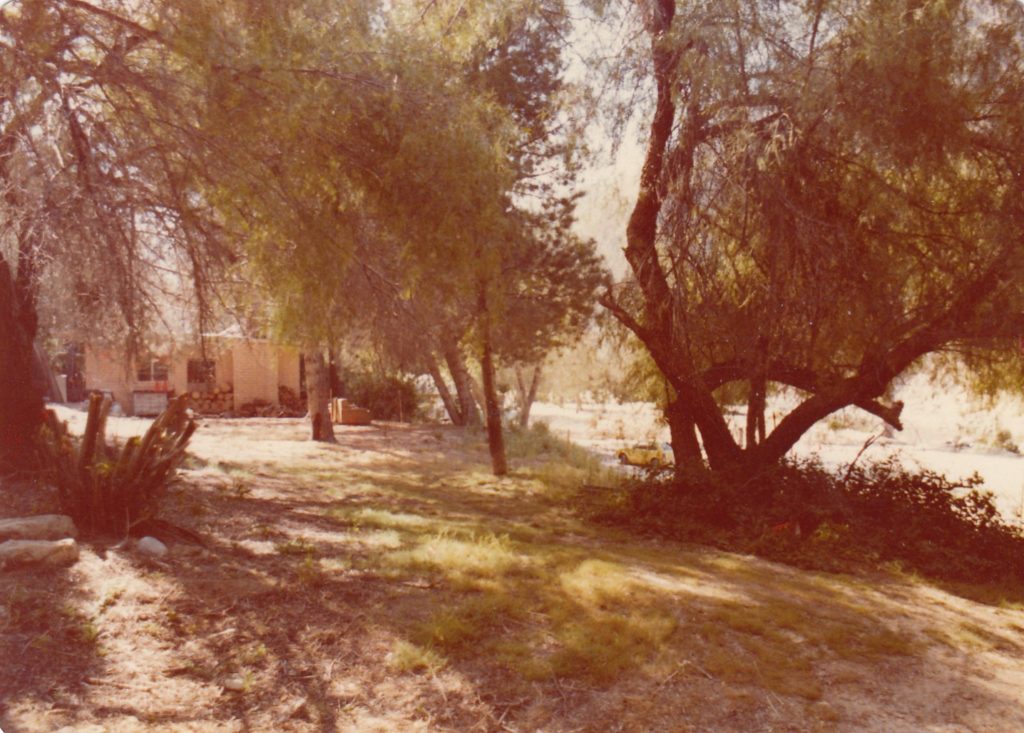 The pepper tree!
Building the house required me working on it every day from 8 AM till 11 AM, then home for a shower & lunch, then to work.   And all day both Saturday & Sundays.  It took 3 years to complete it to where I could move in.
I began by digging the foundation trenches, installing all the reinforcing steel, and building all the forms.  That took three weeks.  Then I called the County building inspector.
The inspector had to come from the Arcadia office, got lost, but finally found the place.  He looked at what I had done and asked me “Have you done this before?”
I said “No, I’ve never built anything before”.  He shook his head and said “Well you’ve done it all wrong.”  “It has to be done right before it can be approved”.   Oh my!
He explained how it should have been done.  I tore out everything and did it the way he told me.  Another three weeks!  But the next time he came he approved it.
Once this inspector figured out that I wasn’t trying to cheat or cut corners he became my mentor.  Since it was so far from Arcadia [40 miles] he’d bring his lunch, inspect what I’d done, then we’d sit at the picnic table and he’d ask me “What’s next?”
I’d tell him and how I was going to do it and he’d say “That’s good, but here’s a better way to do it.”  I learned a huge amount from him and we became good friends. 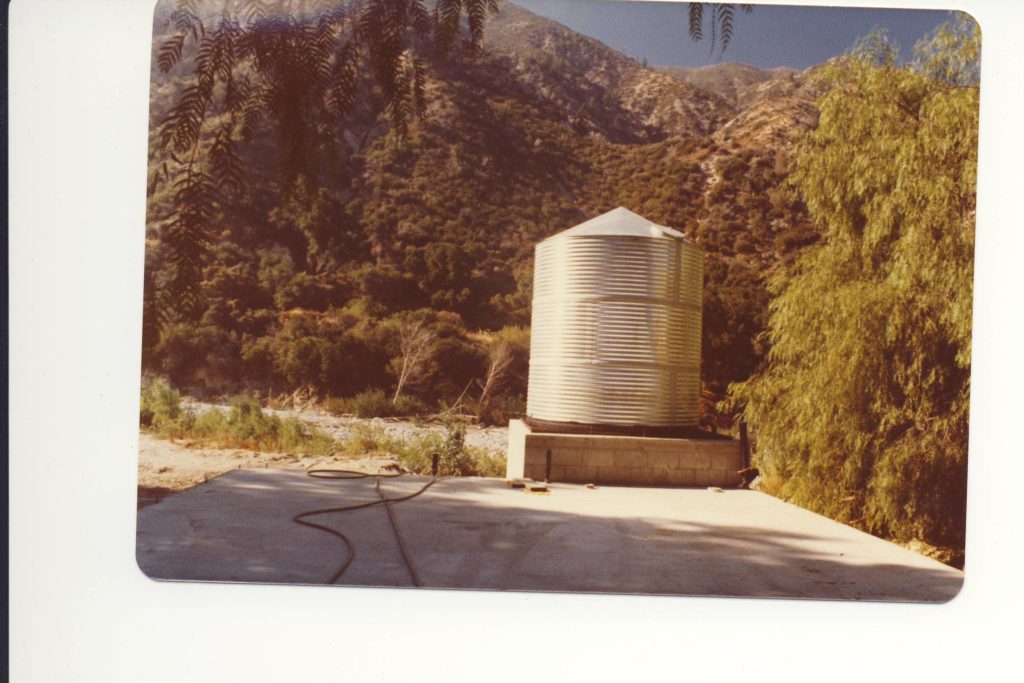 The slab & the 3,000 gallon water tank.
The only “hired help” I had was a concrete mason [Walt Baughman] to “float” the slab.  My dad would come up occasionally and would spend all his time picking up bent nails and straightening them [he came from the depression]. 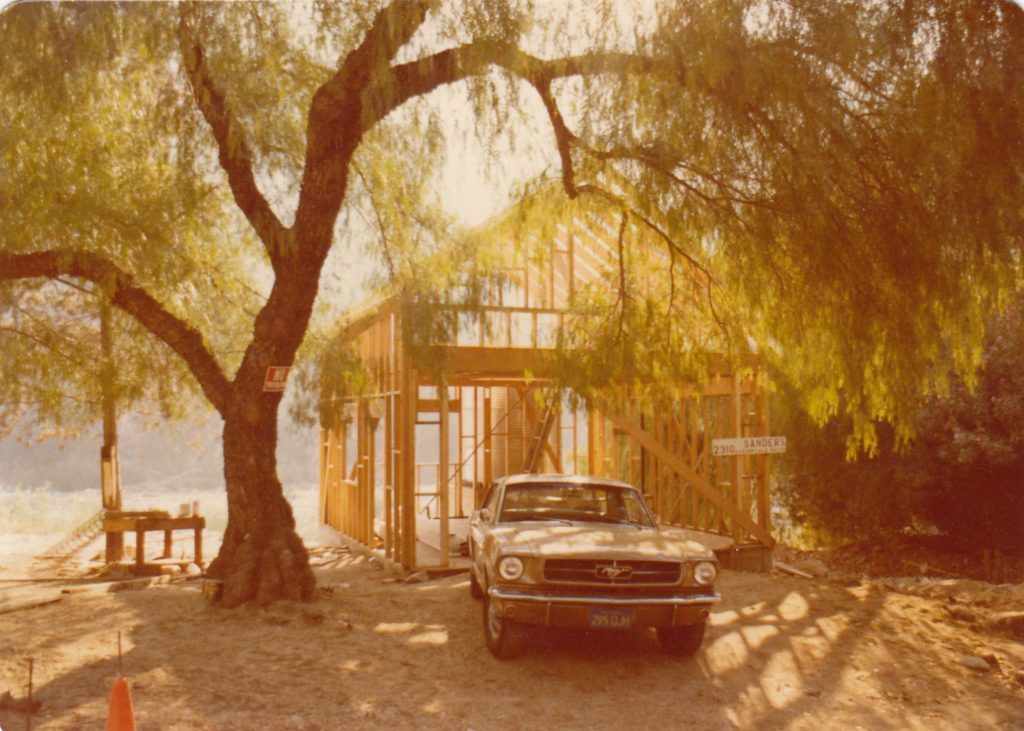 Mom & dad the day we tipped up the first wall.

Next step is the plywood sheeting and setting the windows.

Dad, after having picked up and straightened all the nails he could find.

The start of 212′ feet of concrete block walls.

3,000 gallon water tank, propane tank, shed which housed the pressure tank and pump for the water system, and the emergency generator.

And so it went until Thursday July 3rd, 1980 which is the day I moved in!  Of course it was “bare bones”, only a few items of furniture, no landscaping, dirt everywhere, but at least I was “in”.

One interesting thing was between me and my inspector “mentor”.  After giving me his final “approval” he said “You ought to get a contractor’s license.”  I told him that it required evidence that I had worked for another contractor for 3 years.  He handed me an application and said “Don’t worry about that, I’ll take care of it.”  And he did!  And I’ve had a contractor’s license ever since!  #526695

The next steps were building the walls [212 linear feet of concrete block 8x8x16’s, rebar vertically and horizontally every other row, grouted solid!], landscaping and lawns, planting 13 fruit trees, building a carport, tool shed, gazebo for the pool, and lastly the swimming pool.

The pool and gazebo

Can ya dig it!

I did all the decks, about 4 sq. ft. a day, it took months!  This photo and that brick is the very last one, and that’s how I felt about it!

My friend Gerard was the first one to go in the pool.  Here he is!

One of the smaller pool parties we had!  The pool was awesome.  It became the center of the neighborhood and every kid in the canyon learned to swim there.  We had parties and BBQ’s with sometimes 40 or 50 people there! 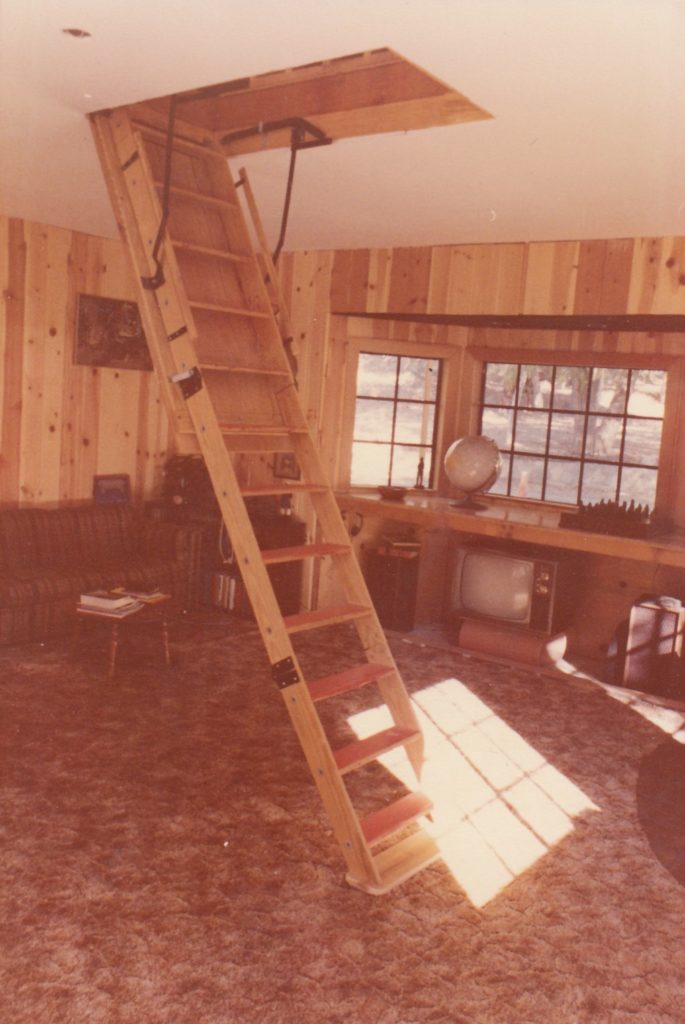 For the first 5 years I didn’t have a stairway up to the bedroom.  Just this pull-down ladder.  It made for some interesting conversations with “dates”. 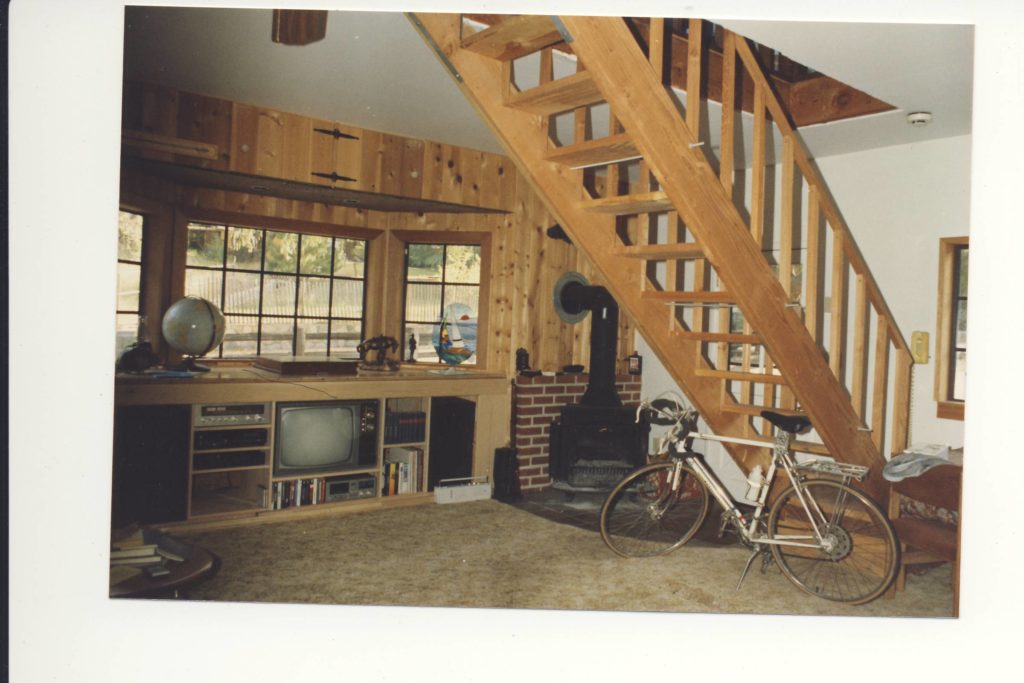 But I added stairs.
The entertainment center was under the bay window where the garage door would have been.  And that’s a “real” all cast-iron Franklin Stove with a BBQ rack and iron pot.  I did lots of BBQ’d steaks during rainstorms in the middle of winter without going outside! 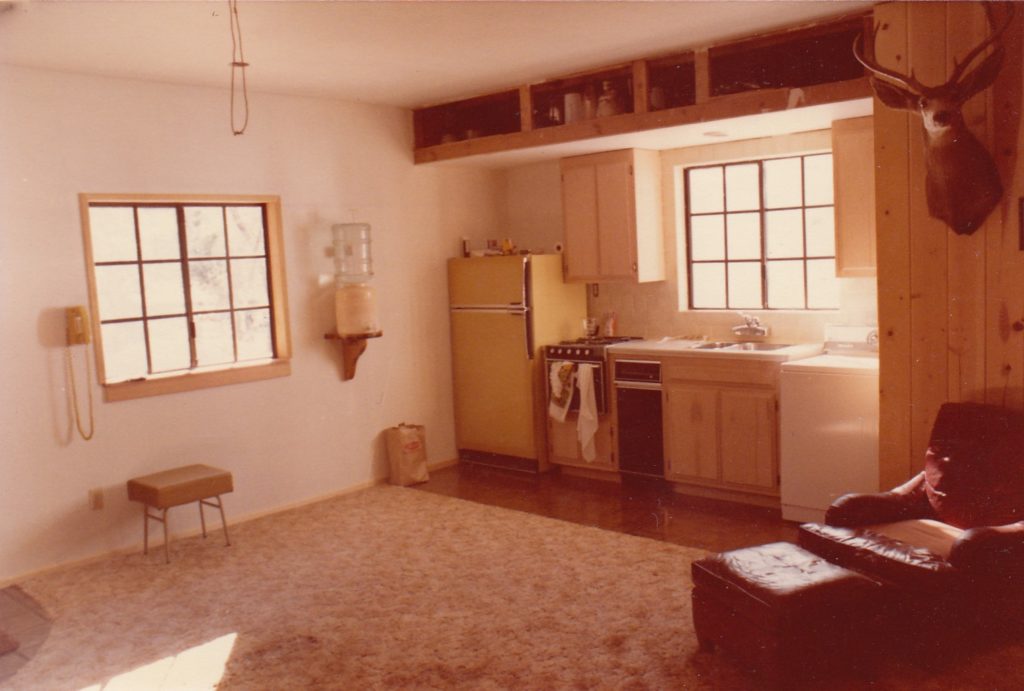 The kitchen.
I would have had a wash sink, a shower and toilet in my garage as originally designed.  Turning this garage into a “house” I just made everything more “house-like” instead of “garage like”.   Refrigerator, sink & counter, washing machine & a solar powered clothes dryer!  I had a toilet and shower in the tiny bathroom, but no bathroom sink.  I used the kitchen sink.  The dining table was by the window after I built the stairs. 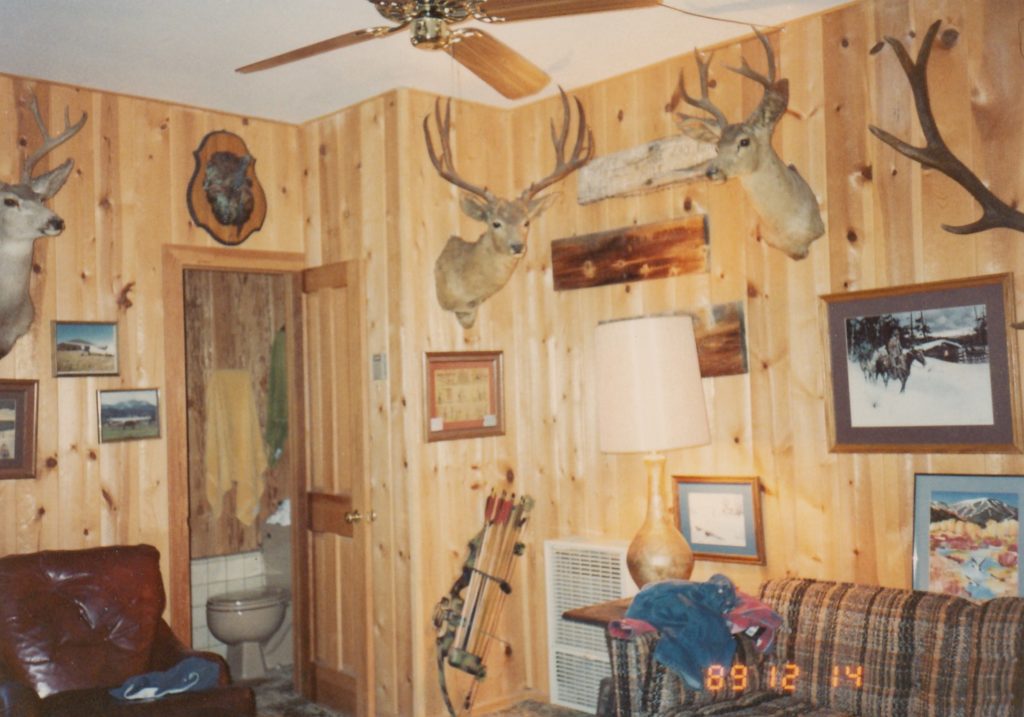 It was warm and comfortable!
You can see the tiny “One Butt” bathroom.   Photo take before I stained the wood wall darker. 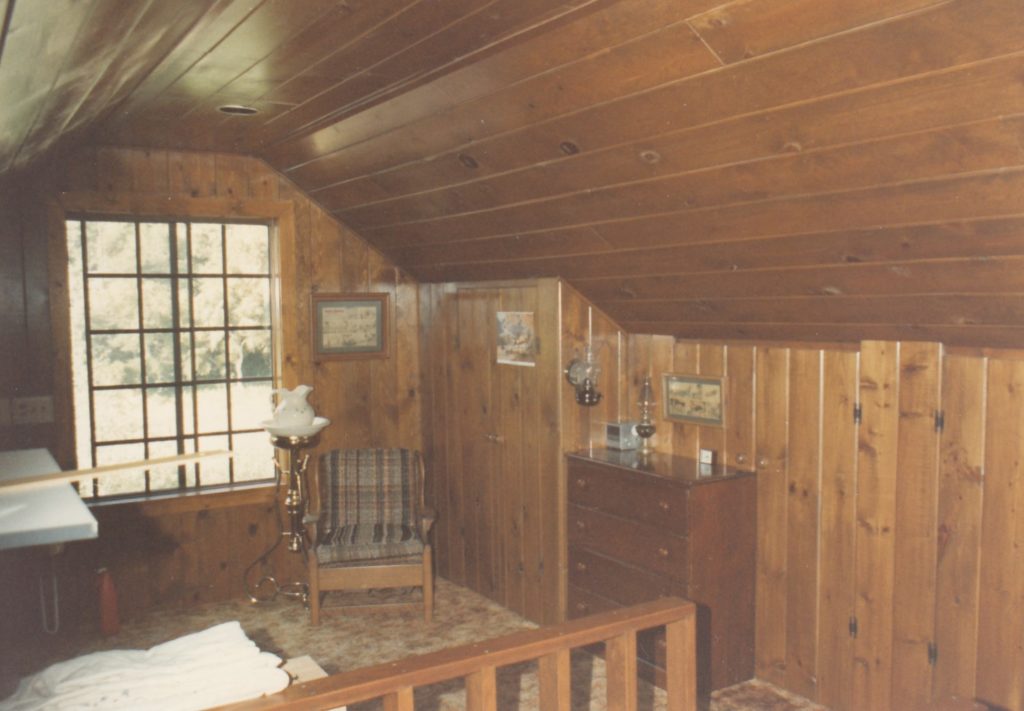 Upstairs bedroom
Closets along the west wall. The bed was to left of the widow which looks out on to the stream. 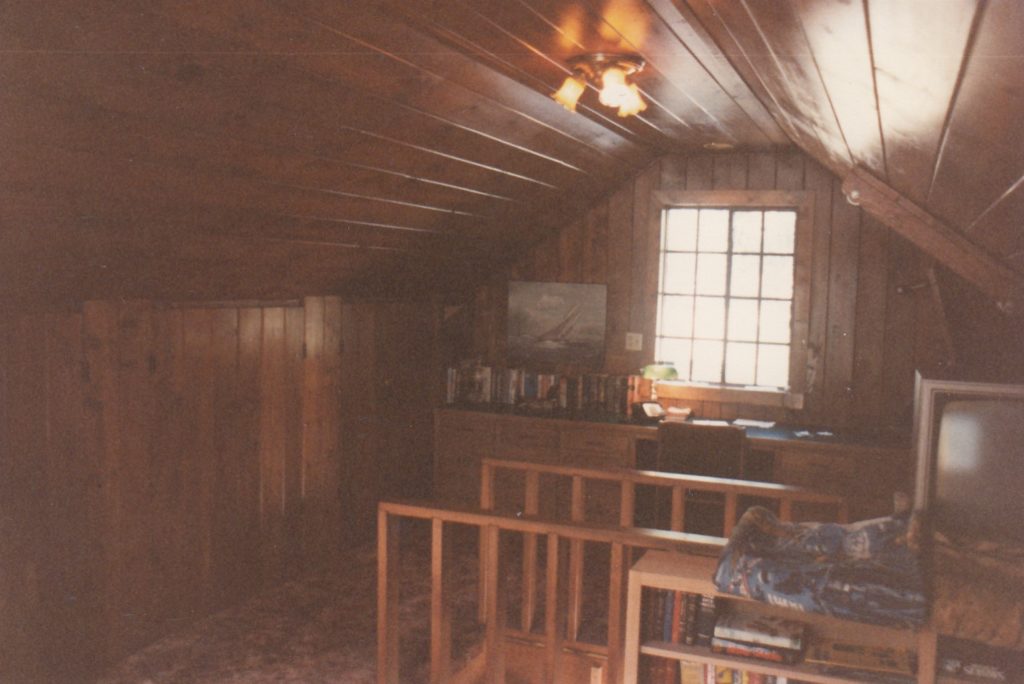 Built-in desk system where I had my first computer.
It was an”XT” Dos machine with .514 memory, keyboard, 10″ mono-chrome monitor, “floppy drive” [the “floppy” floppy drive, not the “hard” floppy drive of later], and dot-matrix printer.  The internet and email hadn’t been invented yet.  It was essentially a word processor.  But what an improvement over the typewriter I had been using.  And I still have it!

The canyon was subject to floods and fires.  We had a big flood in 1977 before I’d started building that wiped out my corrals, hay shed, water well and all the Alder trees along the creek.  The scene changed dramatically.  All the trees in the stream bed were gone, just a field of boulders was left.  Then another flood in 1981.  No damage to my home because I’d built it on high ground. 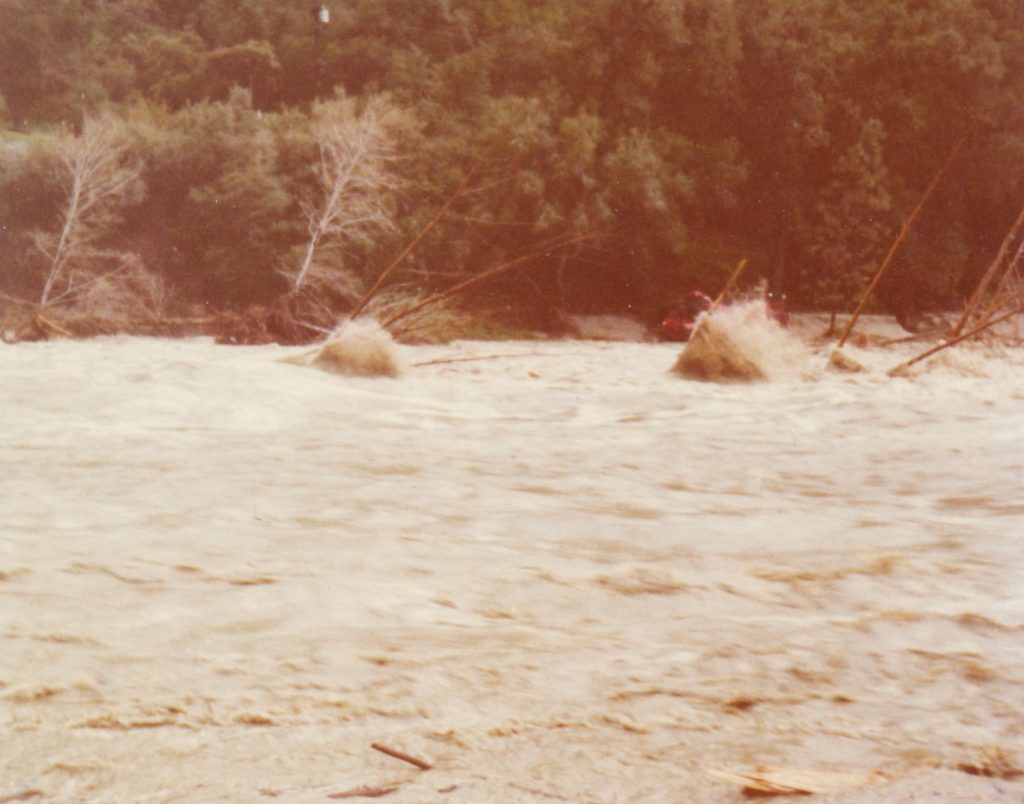 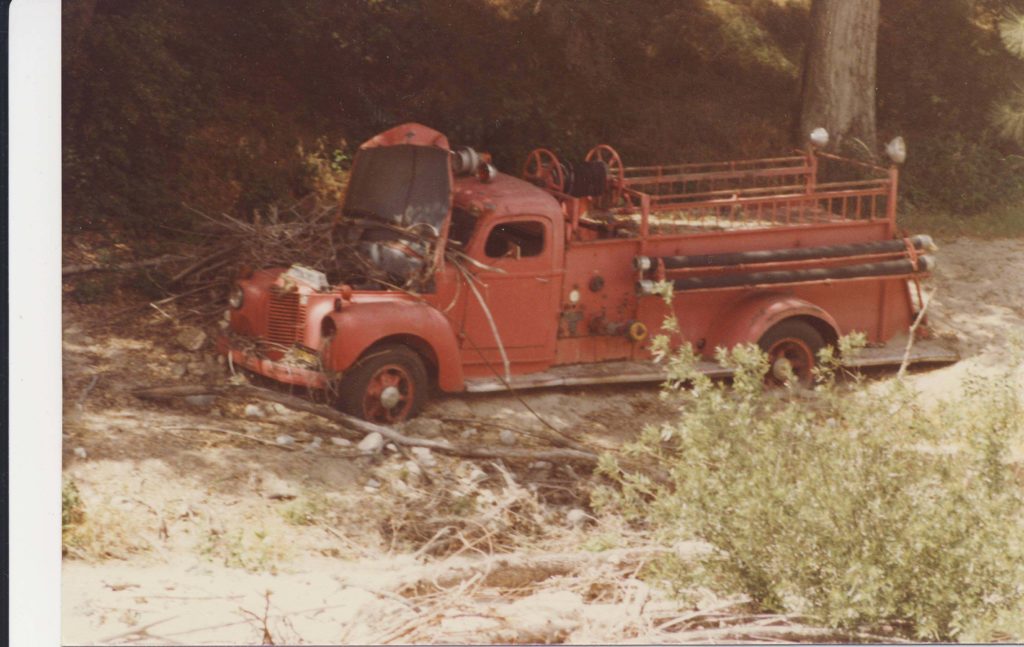 The flood waters went right over the top of this firetruck. 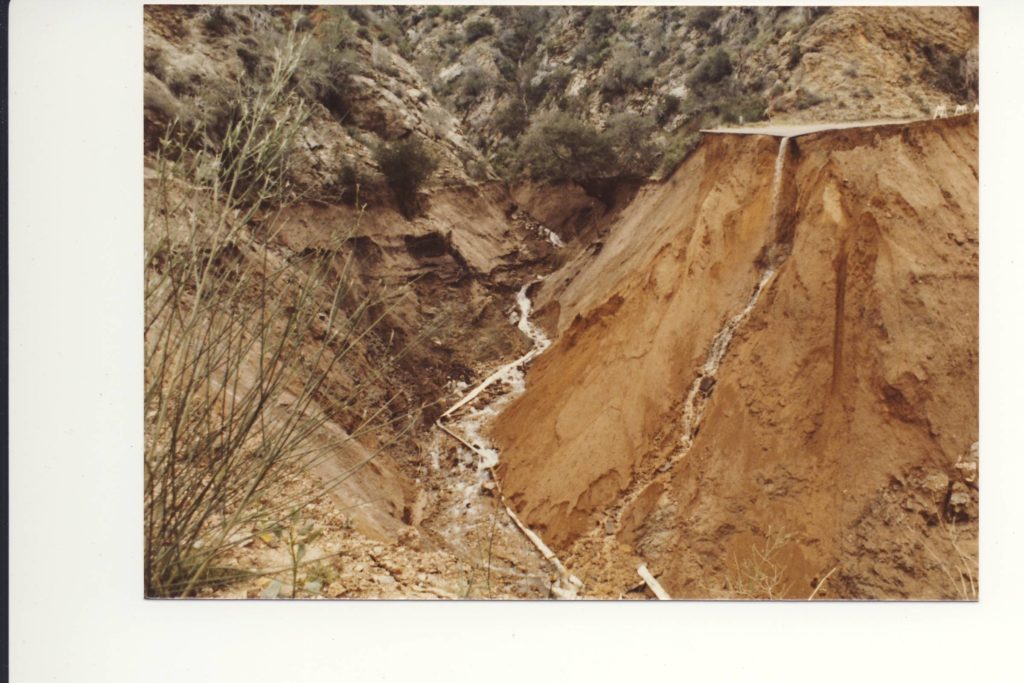 This is Big Tujunga Canyon Road just above Stoneyvale.
Water came down that little canyon and washed the highway away.  That’s almost 100′ deep.  It wasn’t fixed for 3 years because of an idiot Forest Service bureaucrat biologist who made some really stupid demands of the County Road Department!

We also had a number of fires that impacted the canyon, but no photos.

Helicopter crash
A Sheriff’s Department helicopter was on an assignment to find a “missing” airplane that had supposedly crashed somewhere in the canyon.   The helicopter pilot knew where I lived and knew I had a helipad.  He was going to land and pick me up since I knew the canyon.  As he approached my helipad he hit a power line that he didn’t see.  And crashed.  Moderate injuries but the Sheriff’s helicopter was completely destroyed. 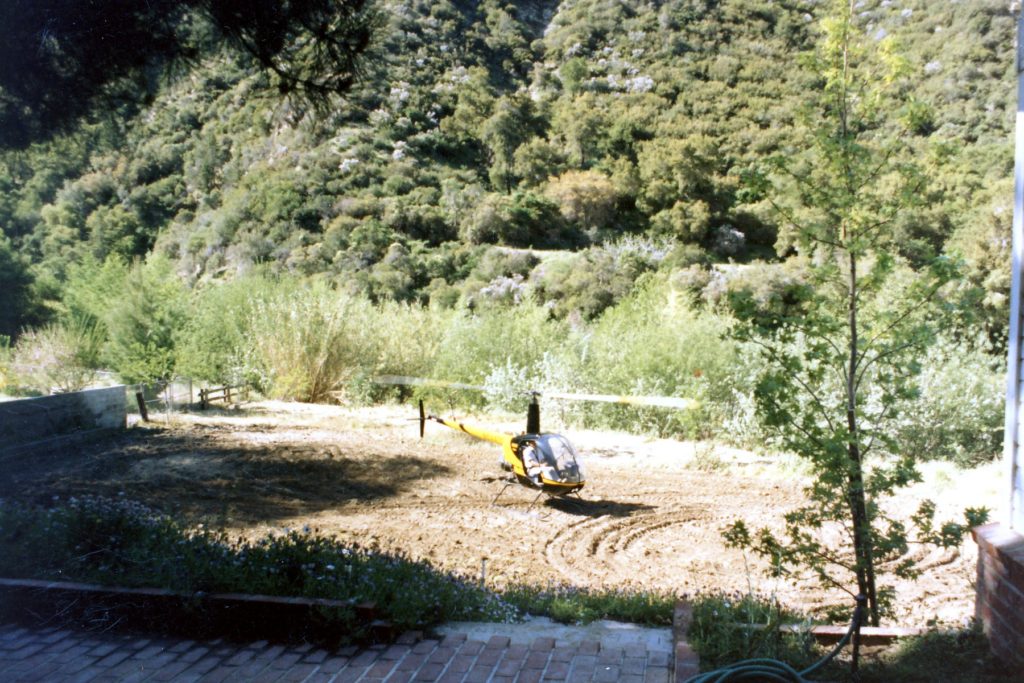 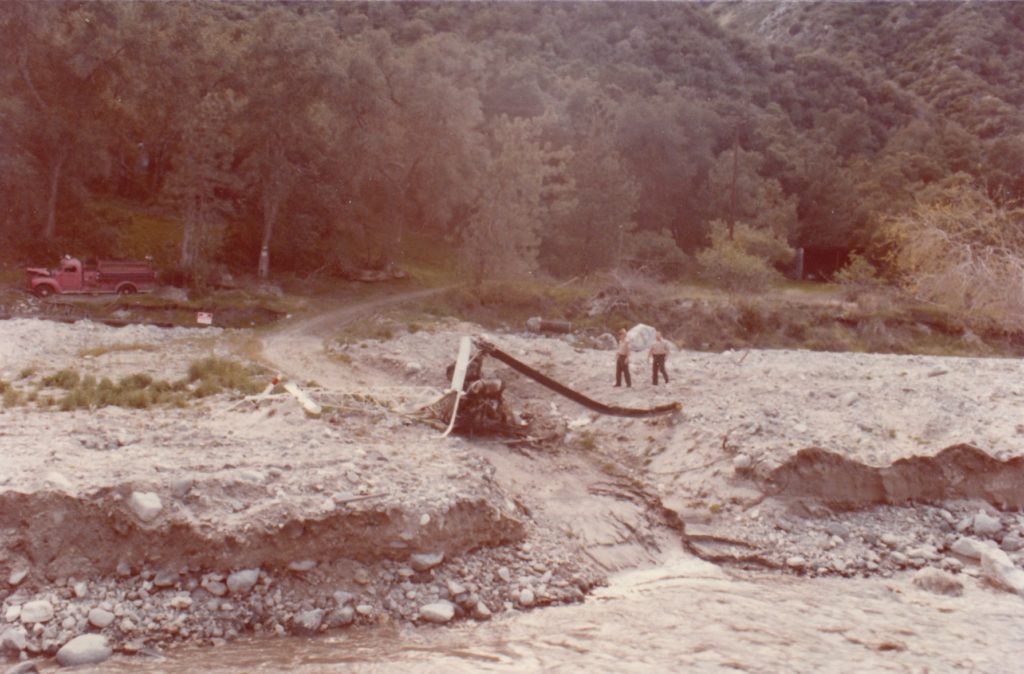 All that’s left of the crashed Sheriffs helicopter. 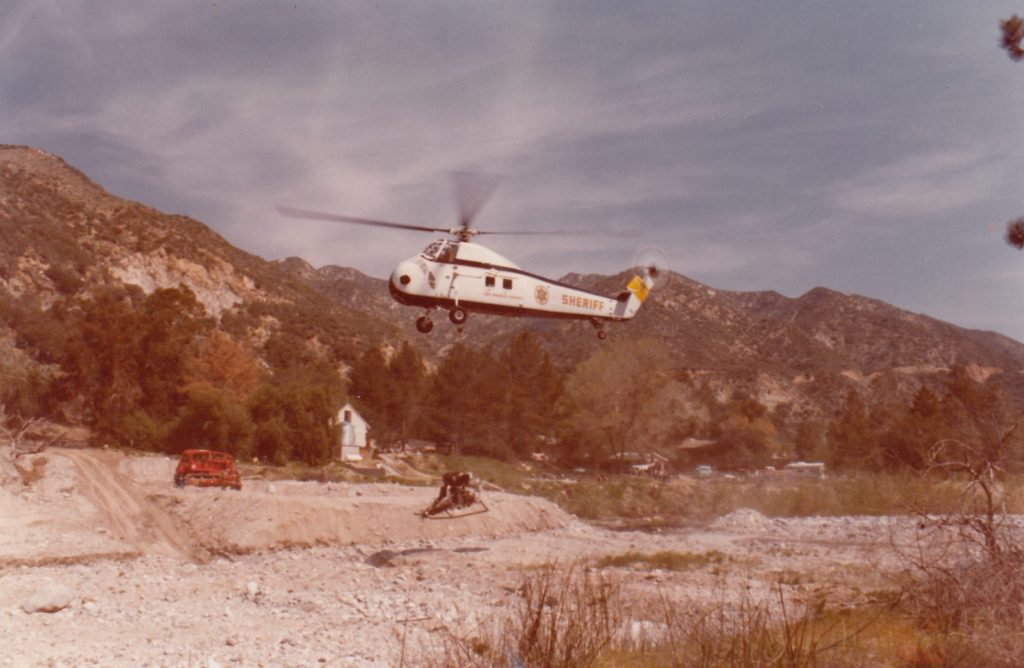 The Sheriffs Sikorsky “Air-5” hauling the “remains” out. 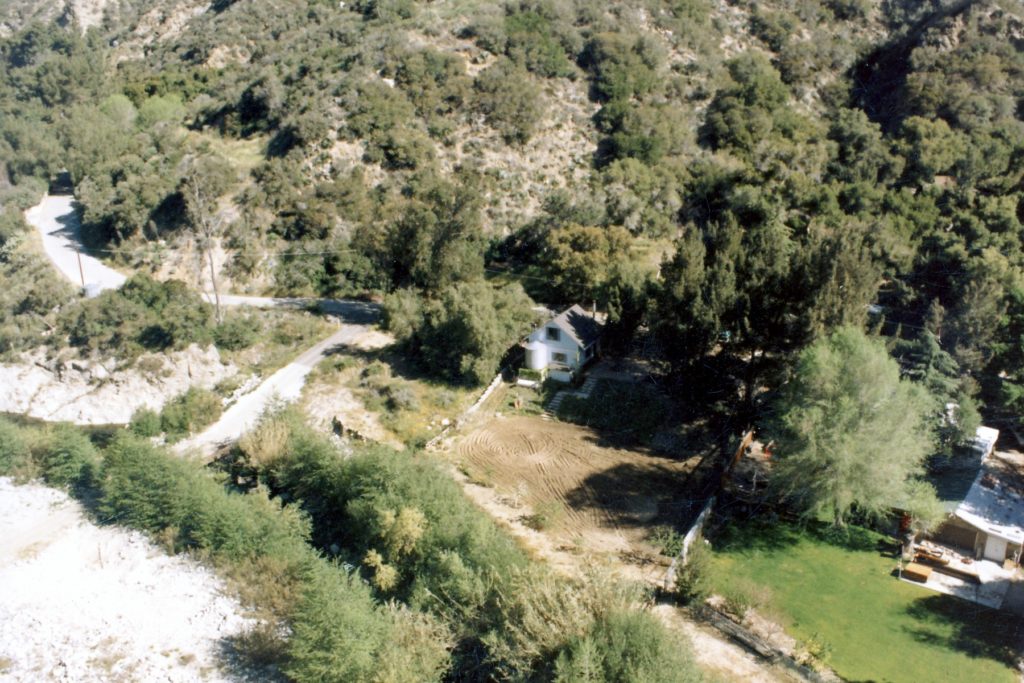 My home from the R-22 helicopter before the landscaping and pool.
The Station Fire of 2009
In 2009 the Station Fire wiped out all but one home on Stoneyvale, including the one I built.  The Forest Service was responsible for the losses, especially mine.  A condition of my getting a permit to build was the installation of a 3,000 gallon water tank with a 4″ hydrant on the street in front of the home.  The Forest Service knew where it was and inspected it frequently.  During the fire the forest service fire trucks fled, saying they were out of water [trucks hold only 300 gallons].  They drove right past the hydrant with 3,000 gallons available,,,, and let the homes burn.

This is what’s left of my house.The gap between the brick is where the front door was.

The front door. If you look to the far right of the picture, on the concrete block wall, you can see the valve for the hydrant.  After the fire the 3,000 gallons of water was still in the tank!

Where the bay window was! 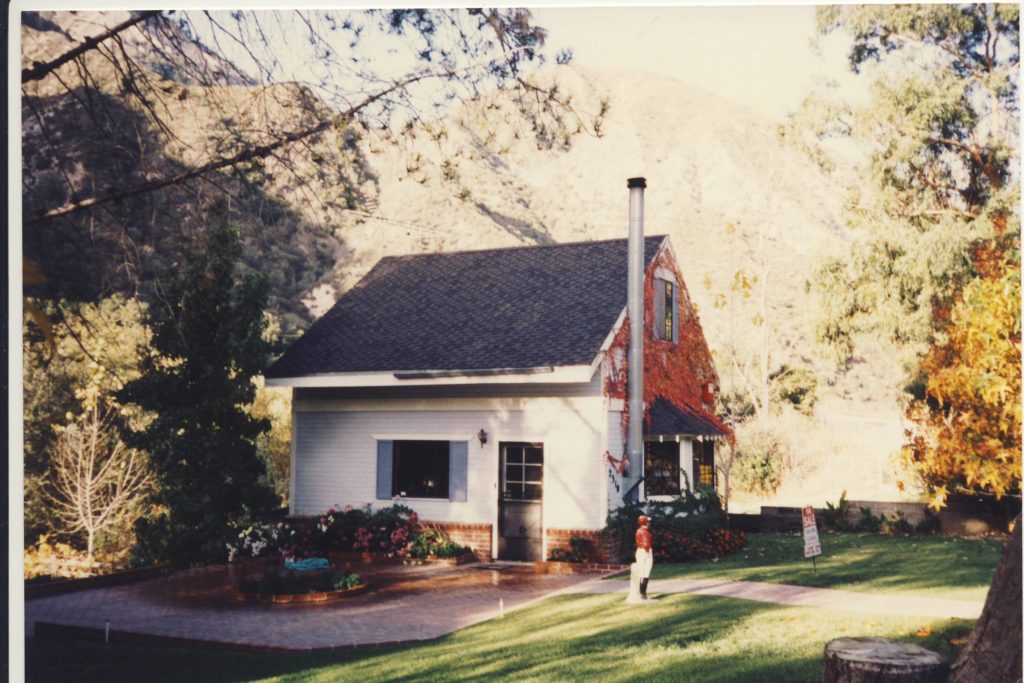 A number of reasons why I sold.   If you needed a quart of milk or something, it was a 16 mile round trip to Tujunga.   Every time there was a fire anywhere in the canyon the Forest Service closed the road and sometimes you couldn’t get home for days!   Same thing with rain, the County would close the road and again, sometimes you couldn’t get home for days!  S.C. Edison’s power would go off regularly, and for days at a time.  If you wanted to go to a movie, restaurant, or go anywhere, it involved a long drive.   Another reason was that during the summertime you didn’t dare get out of your car without a flashlight.  Rattlesnakes everywhere!

So I moved to La Canada.