This is the saga of how I managed to go to Valley State College [now called CSUN], beginning September 11, 1967 with no money for 2 years by living in my van.   Here’s how it was done.

Having just come from 2 years of living in my car at Malibu as a total “surf bum”, I didn’t have much in possessions besides a few clothes, this 1959 VW windowless van which I affectionately called the “Mule GT”, a mattress, sleeping bag and some personal effects.  And no money. 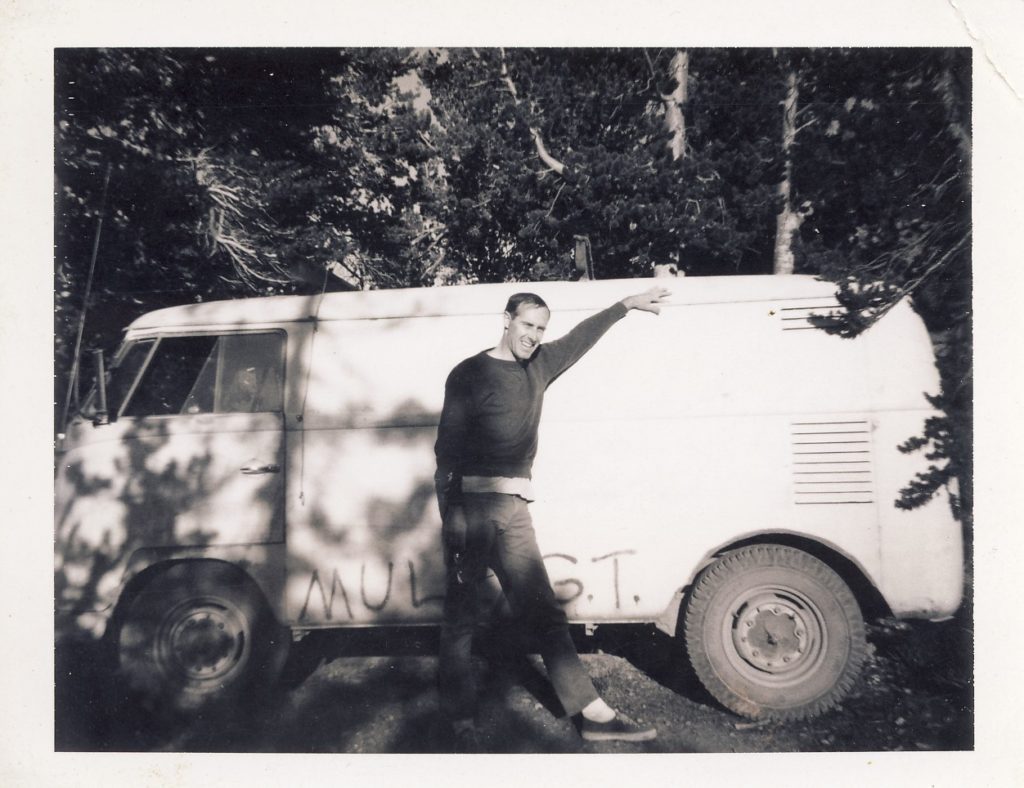 I parked my van on campus at the corner of Plummer & Lindley [Northridge] from Sunday night until Friday afternoons.   It was reasonably warm and it was dry and I had a radio that I could listen to music [KFWB, “Channel 98”].   The school gym was right there and I quickly discovered that the gym doors were open all night because the custodians were inside cleaning.  So that became the source of my 6 AM toilet & showers.  No money needed there.

For food I worked in the student cafeteria.  The deal was that for every hour you worked you had your choice of either cash [$.95 per hour] or a meal.  So I worked every day from 11 AM to 2 PM, 3 hours, and got 3 meals a day.  I started by “busing” tables [Are you gonna finish that?], got promoted to the dish room washing dishes, and finally I got “promoted” to making pizzas [frozen patties, smearing on sauce, throwing on some Parmesan cheese, and some Pepperoni].   And I learned to HATE cafeteria food!

There were two dinner opportunities a week that gave me break on the cafeteria food.  On Wednesdays there was a radical “political” organization, the SDS [Students for a Democratic Society] that had a house just off-campus.  If you went there, listened to their propaganda, nodded your head the requisite number of times, they gave you dinner.   Spaghetti, salad, cheese toast & a coke.  Wonderful!

On Thursdays there was another group, the Mormons, who also had a house just off-campus.  You’d listen to their spiel, nod your head in a convincing and very pious way, and they gave you dinner.  Spaghetti, salad, cheese toast & lemonade.  Wonderful!

So that took care of food.  No money needed there.

For text books I discovered that when a professor orders books for his classes that students are going to have to buy at the bookstore at ridiculously high prices, the publishers always sends a couple of copies to the college library. I’d go to the library first thing Monday morning, check out the text books, keep them until Friday afternoon, turn them back in, and the library staff would re-shelve them over the weekend. The next Monday morning,,, the same drill.  I never had to buy a textbook!  I’ve found that you can still do that today at colleges!

That took care of the text book problem, no money needed there.

Living “on campus” 24 hours a day took care of the “studying” problem.  There wasn’t a whole lot to do other than to study.   Which is why I ended up getting nearly straight “A’s”.  There were student study lounges that had typewriters, paper, mimeograph machines and other supplies that you could use.  Computers hadn’t been invented yet.  So I’d study there until 10 PM.   The other study spot was Busch Gardens which was near by and had 3 “kiosks”, one for each kind of beer.  A bunch of us would go there every afternoon.  Busch Gardens was free and we’d sit at each kiosk in turn, have a free beer, and study.  It didn’t get any better than that! 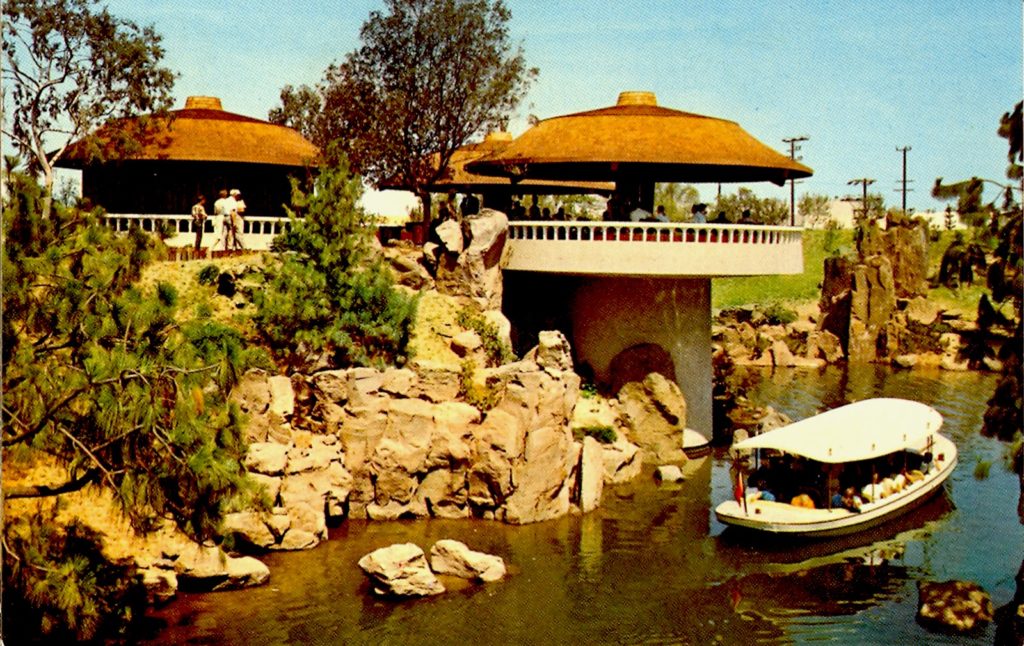 A couple of the “recreation” things to do on campus was using the “Arts” and “Shop” facilities.  In the Arts building there were “two classrooms” for making ceramics.  The ceramics kiln was in a separate room which adjoined both classrooms.  I wasn’t in either of the classes but the instructors didn’t know that.  Each thought I was in the other instructor’s class. So I got to do a lot of ceramics which became free Christmas gifts for family since I didn’t have any money.  The same thing with the wood shop.  I made a lot of cheesy things like bird houses for gifts.  No money needed there.

Looking back from today’s perspective, I recognize that 1968 was the beginning of our country’s “social revolution” with the mass “protests” & marches.   And with it, the start of today’s drug culture that we’re experiencing.

I saw it begin at Valley State in 1968 when a number of “outside agitators” from the SDS [Students for a Democratic Society] came on campus and began organizing susceptible kids.  The SDS people were not students at the college.

Prior to 1968 Valley State was just a normal, drug-free everyday college and the students were there for an education.   Shortly after SDS’s arrival the student demonstrations began, the takeover of our College’s Administration Building, the sit-ins, the rabble-rousing, the flag burnings, the marches, etc.

On Friday afternoon I’d get a couple of guys to help me push the van to start it.  The battery was always dead.  I’d drive down to Marina Del Rey where I had befriended a guy, Les Fulgham, who owned a big 45′ wooden ketch, the Stardust.

Les was a “big name” in the “Hollywood” scene and had bought the Stardust from Dick Smothers of the “Smothers Brothers” fame.  On weekends there were always one or two “Hollywood stars” hanging out on “Stardust”.   Charlton Heston,  Michael Caine, Dustin Hoffman, and a bunch of others.  But I,,,, being told explicitly that I was nothing more than the “boat nigger” [in those exact words],,, I wasn’t allowed to speak to or have any contact with them.  We’d take them out sailing on the Stardust. 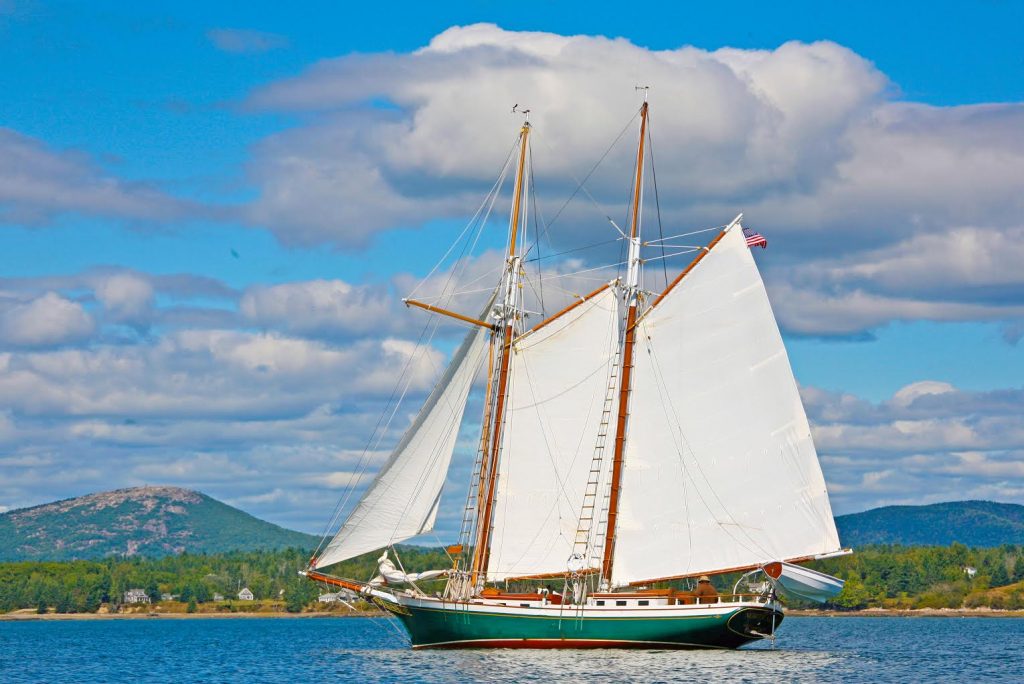 The gaff-rigged staysail ketch Stardust in the Carribean

I worked on Saturdays and Sundays doing all the maintenance on the boat and helping sail it in exchange for $5 a day, a bit of gas money, meals, and for Les teaching me to sail.  I painted Stardust from the top of the masts all the way to the waterline!  Les’s big dream was to sail Stardust around the world.  He never did go [can you say the words “divorce” & “ex-wife”?]. 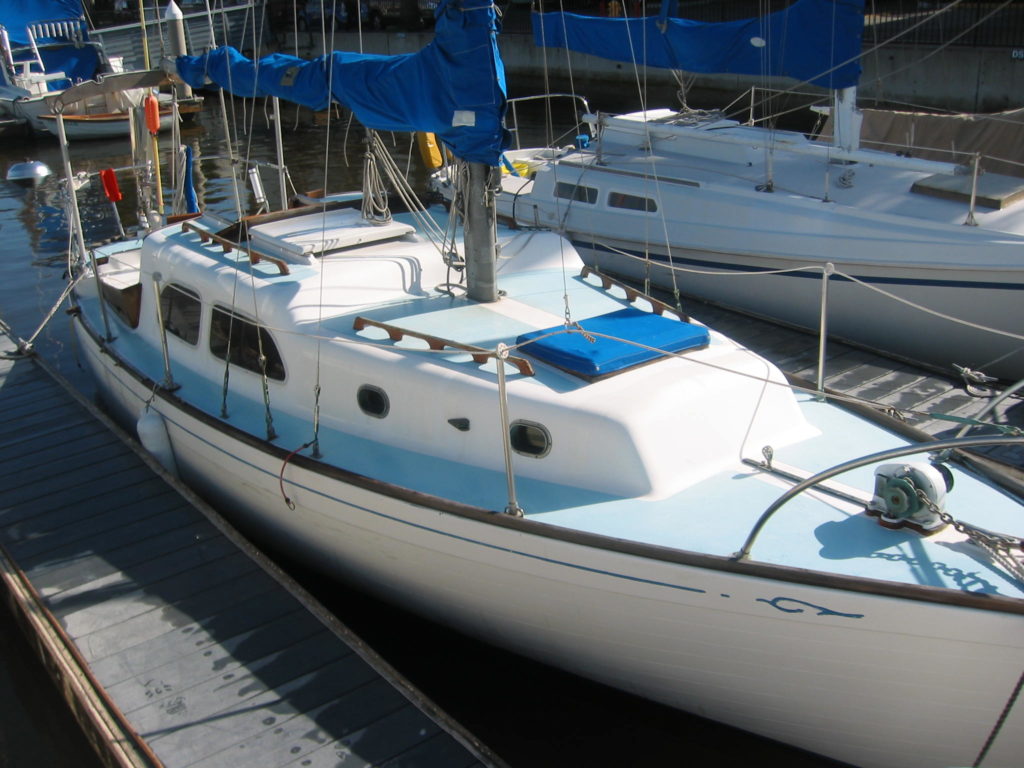 Cimba,  my Islander 29
It was also one of my dreams, to sail “all the way around”.   And years later I  had my own boat, Cimba, which was a capable world cruiser, but I never went.  That’s another story.

On Sunday evening Les, his beautiful French girlfriend Gabrielle, his 12 year old son, and I would go to “Ye Mucky Duck” in Santa Monica and Les would spring for for fish & chips, and “Shandys” [beer & lemonade].

Sunday night I’d drive back to Valley State, park in my regular spot, and it would start all over again.  And that’s how I went to college on no money!   I graduated [Dean’s List] with two Bachelor degrees,  one in Innate Behavior, the other in Human Factor Engineering.